Communication Panel Q & A: Welcome to the Industry 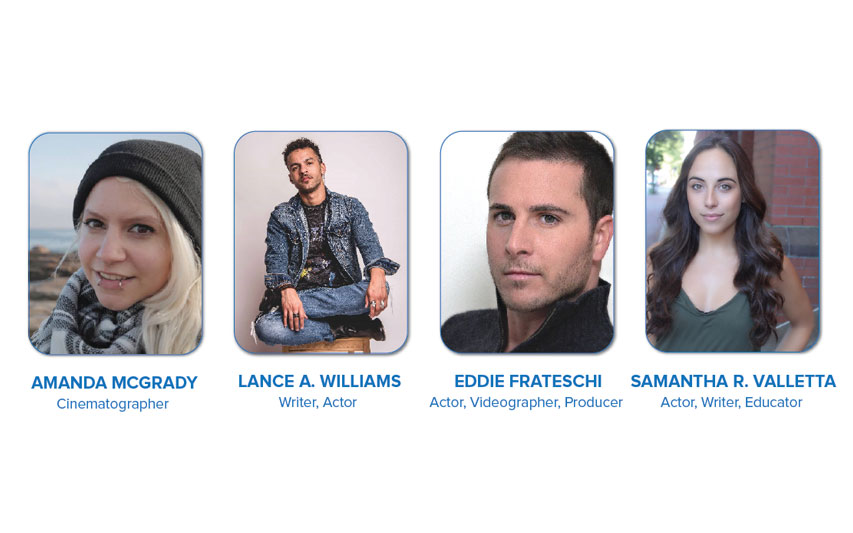 Note:
This event occurred in the past. Information and links provided here are for historical reference and may no longer be valid.

Are you a communication student, ready to enter the entertainment industry after Curry, but don’t know where to start? On Friday, March 22, Curry College will host a panel of some of the Northeast’s top talent in the film and performance world, including actors, writers, cinematographers, and editors.  Join us for a Q & A discussion to get an inside look at how these industry professionals handle the changes and face the challenges straight on. Don’t miss this wonderful opportunity to get a head start on your career.

Amanda McGrady is a cinematographer with a passion for filmmaking that began with shooting short horror films in high school. Soon after that she started working in the industry while attending Emerson College where she earned a B.A. in Visual Media Arts. Her passion for cinematography grew and she began working in a busy motion picture rental house to master the technical aspect of her work before taking off as a freelancer. Over the years Amanda has shot a variety of short and feature films that have screened in festivals around the world. She has also filmed television and video content for outlets like NBC, The Huffington Post, and The Washington Post as well as online content for brands like Reebok, JetBlue, and The Boston Celtics.

Lance A. Williams, originally from Delaware, came to Boston in 2012 where he trained in improv and Meisner technique at the New England Actors Workshop under Richard C. Bailey. In the years following, Lance took on the title role in AMS Pictures' Price of Fame: Prince, donning the wardrobe and androgynous sex appeal of the late iconic artist in a performance that has been called "a surreal
experience to watch." Most recently, you can see Lance alongside Denzel Washington in, his first sequel, Antione Fuqua's The Equalizer 2, which is set in Boston. On the festival circuit, Lance gives a corner- turning performance in Chasen Parker's short film American Fishtrap as Leon, to premiere at the Cannes Film Festival and one that garnered a Best Actor nomination at The Wild Bunch Film Festival for Lance. This year you can see him alongside What Men Want star Aldis Hodge and Castle Rock's Rory Culkin in SHOWTIME's cop drama City On A Hill.

Eddie Frateschi has appeared in countless regional and national commercials for major brands, independent films, along with the occasional TV series and studio film that shoots in the MA area. Having worked and honing his craft in other regions including Dallas, TX and Los Angeles, CA. During that time, he worked closely with a renowned private acting coach and manager, and was briefly considered for the role of Captain America. He was also Rob Lowe's on-camera dialogue double for the recent Super Troopers sequel. His latest speaking roles are in the recent blockbuster-format reboot of "Slenderman" as the biology teacher, as well as a fireman in the
Showtime series "SMILF" starring Rosie O'Donnell and Frankie Shaw. Eddie has always shared his appreciation for acting with filmmaking, so in the last 5 years he's also built a full-service video production company, creating content for documentaries, short films, and commercials for local businesses. He's also worked as a camera man for some of the top casting companies in Boston. With all this experience from the many aspects of the production process, Eddie is a wealth of knowledge and realistic advice for anyone with
serious aspirations to pursue acting and filmmaking. And he is known among his peers to speak very honestly and unfiltered about his experiences in the industry, and will be happy to share with the same sentiment to those seeking insider knowledge.

A graduate of Curry College and 2014 Theatre Hall of Fame recipient, Samantha Valletta '13 began her acting career at the age of 3. Samantha has been fortunate to perform both onscreen and onstage. Nicknamed Boston’s “Commercial Go To Girl” Samantha has worked with almost every advertising agency in the North East. Recent commercials airing include L.L. Bean, Twisted Tea, Hannafords, Wayfair, Ion Music, AAA, Honey Dew and countless others. While recently in blockbuster hit Amy Schumer’s I Feel Pretty and Super Troopers 2, Samantha’s joy is found in Indie films, many of which will be hitting the film festival circuit next year. Catch her staring in Kingdom by the Sea, Boy with the Broken Halo, American Women, as well as thriller Estrus and the LGBTQ romantic The Sympathy Card. “Write a good script, work with good people, live a good life.”