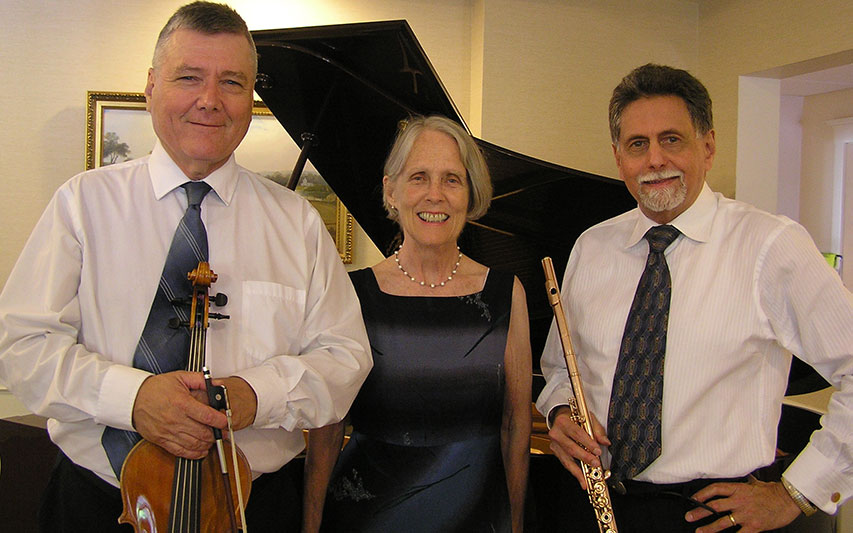 Note:
This event occurred in the past. Information and links provided here are for historical reference and may no longer be valid.

The Keighton Fund of Curry College is proud to present Ensemble Aubade on Wednesday, April 10 at 7:00 p.m. in the Hafer, Parents' Lounge. This musical performance will be followed by a reception and is free and open to the public.

Peter H. Bloom, flute, whose playing has been called “a revelation for unforced sweetness and strength” (The Boston Globe), performs in the U.S., Canada, Europe, and the Far East; is featured on 45 recordings; and is a winner of the American Musicological Society’s Noah Greenberg Award.  He has concertized with chamber ensembles in London, Bangkok, Canberra, Wellington, Ottawa, and other world capitals, and in hundreds of cities across 40 states and four continents.  He is also a noted jazz artist, veteran of the acclaimed Aardvark Jazz Orchestra (46th season).  He has given lectures and master classes across the globe and has served as historical performance consultant to The American Museum in Britain, New-York Historical Society, and The Museum of Fine Arts Boston, where he performs and lectures regularly.

Francis Grimes, viola, has performed with the Boston Pops, Boston Opera, Boston Ballet, Masterworks Chorale, Pro Arte Chamber Orchestra,  Sinfonova, and other distinguished ensembles, and regularly serves in the orchestras of the Colonial and Schubert Theatres.  He toured nationally with the Star Wars Orchestra; and performed with choral groups in Italy, England and the Czech Republic.  He has served on the faculties of Milton Academy, All Newton Music School, Community Music Center of Boston, the Rhode Island Philharmonic Youth Orchestra, and the Young People’s Symphony of Rhode Island.   He completed his BM at Indiana University as a student of William Primrose.

Mary Jane Rupert, piano, praised by The New York Times as exhibiting "indeed real sensitivity," has performed throughout the world from Carnegie Recital Hall to the Beijing Concert Hall. She has appeared with chamber ensembles, choral groups and orchestras across the United States.  She serves on the faculties of Boston College and Tufts University and taught previously at MIT, Wellesley College, and Western Michigan University, among others.  A graduate of Oberlin College and Indiana University, she earned a BM in piano performance, Masters Degrees in both piano and harp, and a doctorate in piano performance.

Established in 1990 by the Pines Bridge Foundation, The Keighton Fund was named for Dr. Robert L. Keighton, an active and dedicated professor of politics and history who has been teaching at Curry College for more than 50 years. The Keighton Fund's purpose is "to provide lectures and performances at Curry College by individuals who are prominent in the fields of academics, arts, sciences, and public service."