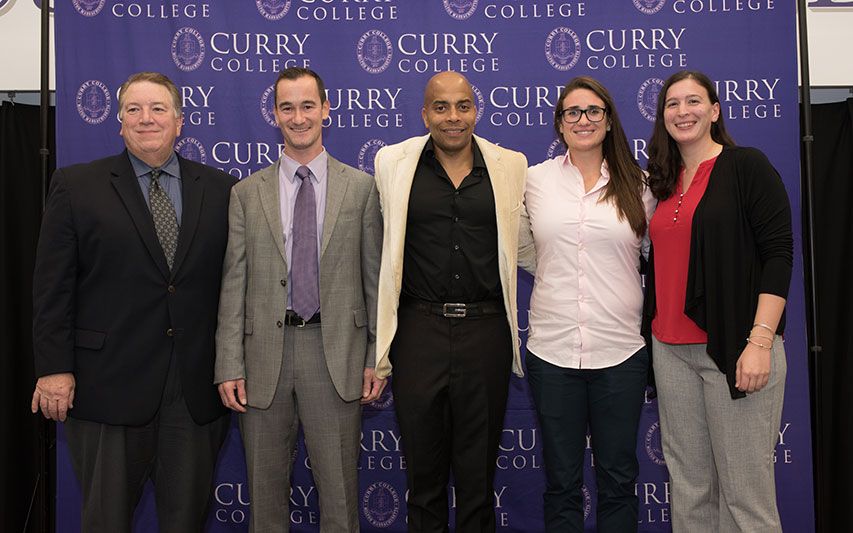 The Curry College Athletic Hall of Fame was established to recognize the College's greatest athletes and those who have given extraordinary support to Curry's athletic program, bringing honor and distinction to Curry. Hall of Fame members include individuals who have demonstrated exceptional athletic ability, personal integrity, high standards of sportsmanship and good character; have participated in varsity intercollegiate athletics at Curry for at least two or those who have made a significant contribution to the Curry athletic program.

Alysia DiMuzio '09 (Softball) The 2009 Female Athlete of the Year, Alysia dominated on the softball field. Named the Rookie of the Year in 2006, she was also a four-time member of a CCC All-Conference team. As a senior, Alysia was named to the ESPN Academic All-America Second Team. She was honored a combined four times by the ECAC and NEISCA as an All-Star. Named the Offensive Player of the Year in 2008 and 2009, Alysia played in 175 career games while tallying 200 hits, 106 runs, 172 RBIs, and a career batting average of .372.

Joe Noonan '79 (Football) Joe was a dominant and versatile offensive lineman playing both and tackle over his four years at Curry. During his sophomore through senior seasons, Joe excelled at the "Blind Side" left tackle position long before this position became recognized for its importance. He received Honorable Mention honors for the 1976 season. A leader both on and off the field, Joe started and played in every game over his Curry career.

Sean Pero '05 (Men's Ice Hockey) The Curry College single-game record holder for the most goals in a game (with five), Sean ranks in the top five all-time in the categories of career scoring, goals, and assists. He made his impact on the ice right away being named the ECAC Northeast Rookie of the Year and an ECAC Northeast All-Rookie Team selection during his freshman season. During the 2002-'03 season, Sean led the nation in assists and placed in second in scoring. For his success on the ice, he was named the Team MVP in 2003. Sean was a four-time selection of an ECAC Northeast All-Conference team and was awarded first team honors by the New England Hockey Writers in 2003-'04. He served as the Assistant Captain for his final three seasons ('03, '04, '05).

Christina Sancinito '09 (Basketball and Softball) The 2009 Female of the Year, Christina excelled on the court, on the field, and in the classroom. On the basketball court, she scored 1,071 career points. Christina was named the Team MVP for two consecutive seasons (2008 and 2009). She received the honor of being named a CCC All-Conference Honorable Mention in 2008-'09.