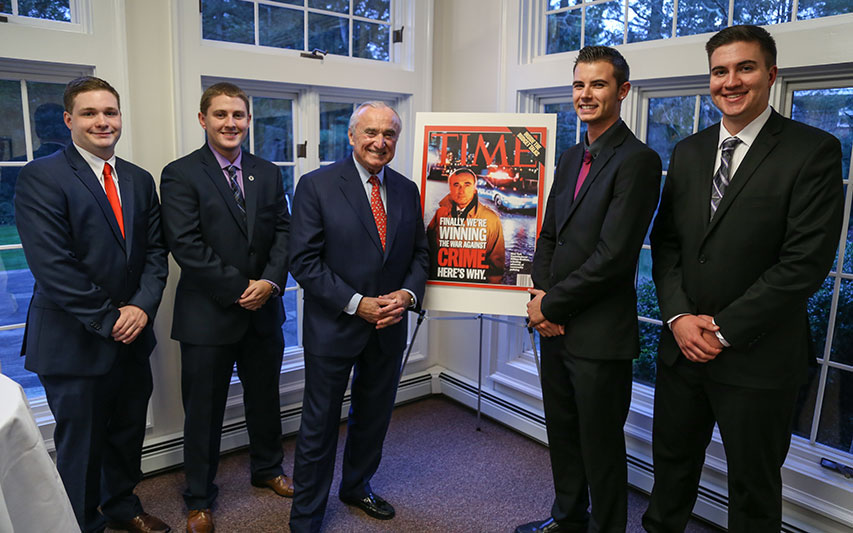 When William J. Bratton was sworn in as a Boston Police officer in October 1970, he fulfilled a childhood dream of becoming a cop. However, Bratton, who grew up in Dorchester, Massachusetts, began his law enforcement career at a tumultuous time, when Americans across the country were protesting the unpopular Vietnam War.

"I came into a world that was changing, and a world I wanted passionately to change by changing policing," said Bratton.

Bratton, who received an honorary degree from Curry College in 1997, recently returned to campus to deliver a presentation about challenges and opportunities in policing in the 21st century. The former commissioner addressed graduate students in the Master of Arts in Criminal Justice (MACJ) Program, undergraduate criminal justice students, alumni, and law enforcement officers from across Massachusetts.

Bratton, who said he shudders when he recalls how ill-equipped he and fellow officers were making foot patrols in the streets of Boston in the early '70s, shared his perspective on how the profession has evolved from then to now. He said policing was a significant accelerant to much of what was wrong in in the '60s: with acts of racism, corruption, and brutality occurring at departments across the country.

In the '70s, Bratton said law enforcement experts largely believed addressing the issues that led to was impossible, so officers focused on response rather than prevention. The professional era of policing arose: foot patrols were eliminated and police patrolled neighborhoods with two officers per vehicle. 911 was created, and the emphasis on rapid emergency response grew.

Bratton believes the mandate to focus on response rather than prevention led to disengagement between police and the communities they served. In the '80s, the efficiency of vehicle patrols allowed police departments across the country to shrink. Bratton says law enforcement's reactive approach, coupled with reduced forces, created a vacuum in which disorder thrived, leading to the explosion of the drug culture and escalating crime rates. Cocaine, hallucinogens, and methamphetamines came onto the scene, and more sophisticated weaponry, including assault rifles, flooded the streets. Violent gangs took over neighborhoods, and police found themselves always a step behind.

In 1990, America experienced a record-setting murder rate, and an increase in overall crime rates including shootings, burglaries, car thefts, robberies, and rapes. It was then that Bratton took command of the New York Transit Police Department, at a time when riding the trains was considered high risk. He issued officers Glock firearms and started a publicity campaign to reduce fear, ultimately driving down crime in the subway system.

Bratton returned to the Boston Police Department in 1993, this time as commissioner, and led a citywide strategic planning team effort that brought crime and homicide rates from all-time highs to the lowest recorded numbers since the early '60s. Boston's homicide rate plummeted from 154 deaths per year to 26.

In 1994, Bratton was sworn in as the top cop at NYPD. He reconfigured Kelling and Wilson's concepts of Broken Windows, coupled with CompStat, the newly developed tool for measuring outcomes. During his tenure, Times Square was cleaned up, crime again was measurably reduced, and neighborhoods became safer.

Bratton, who established an international reputation for re-engineering police departments, was on the cover of Time Magazine in 1996 recognized as a crime fighter and leading advocate of community policing.

He later went to work in the private sector, before accepting the chief job at the troubled LAPD in 2002. The department had struggled with fractured racial community relationships and low morale since the Rodney King riots in 1992. To address these challenges, Bratton built a noteworthy command staff, walked the streets of South Central LA, targeted gang-related crime, and turned the LAPD into a test laboratory for new policing technology.

Bratton returned to NYPD in 2014 at the height of the Stop and Frisk and again worked to assemble a dynamic team and build solid relationships across the city. During this period, he oversaw serious reductions in crime and introduced cutting-edge technology in the Incident Center.

Retired Boston Police Captain and Curry Senior Lecturer Al Sweeney, MACJ '00, said Bratton was invited to speak at Curry because he is the law enforcement executive of this generation.

"His experiences and insights have saved countless lives in declining homicide rates, and improving the quality of life in communities across the country from coast to coast," he said.

Sweeney and MACJ Co-Director Dr. Jennifer Balboni said they wanted graduate students, many law enforcement professionals, to hear Bratton's perspective on how to be a leader amid the unprecedented challenges police face today - from terrorism and cybercrime to racial tensions and the opioid drug crisis.

"We live in difficult times. We live in a world that is very polarized," remarked Dr. Balboni. "The reality is police need the community, and the community needs the police, but more specifically the community needs good police. Through our MACJ program, we're trying to encourage officers to embrace this moment in time in history, embrace these values, and really listen to each other in order to move forward."

Bratton said he believes if police continue to focus on education, equipping themselves with the tools and skills necessary to meet today's challenges, they can do great things.   "We need to solve the issues that divide us; the race issue, immigration, and the whole idea of social injustice," Bratton said. "Instead of being blamed for so much of what's wrong in our society, wouldn't it be great to as being the critical catalyst for the betterment of society?"

Before the lecture, Bratton - who had just returned from Las Vegas - also spoke with the media, sharing his thoughts on the recent mass shooting: