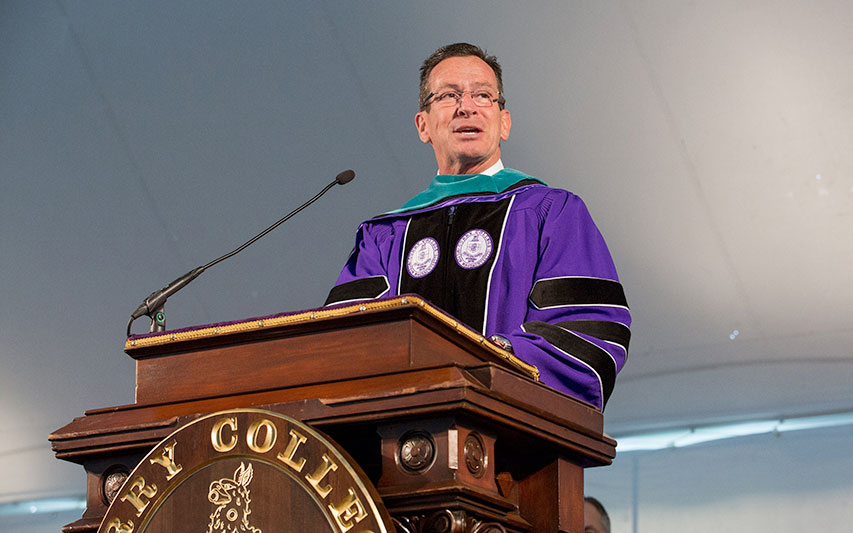 Curry College celebrated its Commencement on Sunday, May 22, 2016, in Milton, Massachusetts, at the D. Forbes Will Athletic Complex.

Dannel P. Malloy, Governor of the State of Connecticut, served as Commencement speaker and was awarded an honorary Doctor of Public Administration degree.

Gov. Malloy was praised from the podium by Curry College President Kenneth K. Quigley, Jr., whose remarks included a sampling of the Governor's professional accomplishments and awards. Yet it was Quigley's anecdotes about the Governor's personal successes overcoming the challenges of learning and physical disabilities that set the stage for the Governor to deliver a moving and memorable address to the College's graduates.

"The story of your life and your career is a remarkable one," said Quigley. "One that provides a particularly relevant and compelling message for all of us gathered at Curry College today.

"Using your innate gifts, together with your spirit, your determination, and your mother's foundation...you excelled academically."

Gov. Malloy used the context of his childhood struggles to inspire the Class of 2016, specifically those students who were members of the Program for Advancement of Learning (PAL) while at Curry.

"In many my life has come full circle. Having grown up with severe physical and processing disorders that took years to overcome, I have a special appreciation for roughly 25 percent of the undergraduates today. You and I have shared this burden and these possibilities together."

Gov. Malloy then challenged all of the graduating students to go out into the world and make a difference, despite any hardships they may encounter along the way.

"This is your Commencement. Commence making the world a better place.  You can do it in big ways and little ways...strive to be the best.  Today is a great day for you. But tomorrow and every day thereafter can be just as great.  Embrace this world, embrace this life, embrace one another, embrace your future. Make us all proud to be Curry graduates and make the world a better place for your having lived in it."

The Governor was in good company with his fellow honorary degree recipient - and wife - Cathy Malloy, Chief Executive Officer of the Greater Hartford Arts Council. Cathy Malloy was awarded an honorary Doctor of Humanities degree.

"We are proud and privileged to honor you today for your significant individual achievements in the social sector, as a leading advocate in both the arts and sexual violence prevention," said President Quigley during his citation of Mrs. Malloy. "And also, importantly, to honor you as a representative of all who supported those with learning differences or challenges in their education and life's journey."

Three student speakers offered advice to fellow members of the Class of 2016.

Traditional undergraduate orator Elaina Druid of Reading, MA used the metaphor of a train ride to describe the choices she and her classmates made about enrolling at Curry, choosing a major, and persevering to graduation. Her advice to fellow graduates: be more than your career choice.

"Aim to be more than your profession," said Druid. "There's going to be a lot of time outside of your career when you'll just be a human being...when your job description isn't going to be what defines you. Look back at the past few months - if there's anything we've seen our world needs now more than ever, it's a decent dose of humanity.

Continuing Education speaker Leon Jarvis of Randolph, MA continued the transportation metaphor, describing Commencement day as marking the completion of a bridge that had been under construction, and also urged graduates to make choices which positively impact those around us.

"Our degrees are bridges to a better life for ourselves, our families, our clients, our patients, our students, and for scores of lives that we will touch," said Jarvis.

Jarvis, a Marine who had been deployed to Afghanistan before attending Curry, also urged graduates to make choices which positively impact those around them.

"Our time has come to do our part in building the bridge from the world as it is today: full of potential and eager to turn its challenges to triumphs, to the world as it should be tomorrow."

John Marquardt of Halifax, MA spoke as a representative of the College's four graduate programs.  Marquardt, who also served his country in Afghanistan as a member of the U.S. Army, echoed the sentiments of his fellow speakers.

"In your actions alone, if you treat people with respect, offer those in need a helping hand, and try to live each day better than the day prior, you too will be living a life for others rather than for yourself," said Marquardt.

"Today, I challenge each of you to do that.  Find a way to give of yourself to make the world a better place."

Moments of special recognition for exceptional academic achievement included the naming of Natalie Ramos of Salem, NH as valedictorian and Emily Aronica of Jericho, NY and Martin Heavey of West Bridgewater, MA as co-salutatorians of the traditional undergraduate class.

In the Division of Continuing Education, Nancy Candelora of Plymouth, MA was named and Richard Johnson of Plymouth, MA and David Kellner of Walpole, MA named co-salutatorians.

Natalie Ramos also received the New Era Award. Each year, the New Era award is presented to a graduating senior who, by virtue of his or her academic excellence, participation in curricular and co-curricular activities, leadership, accomplishments, and the potential for future achievement is determined to have contributed most to the enrichment of the Class and the College at large.