Curry Confers Over 700 Degrees at Commencement 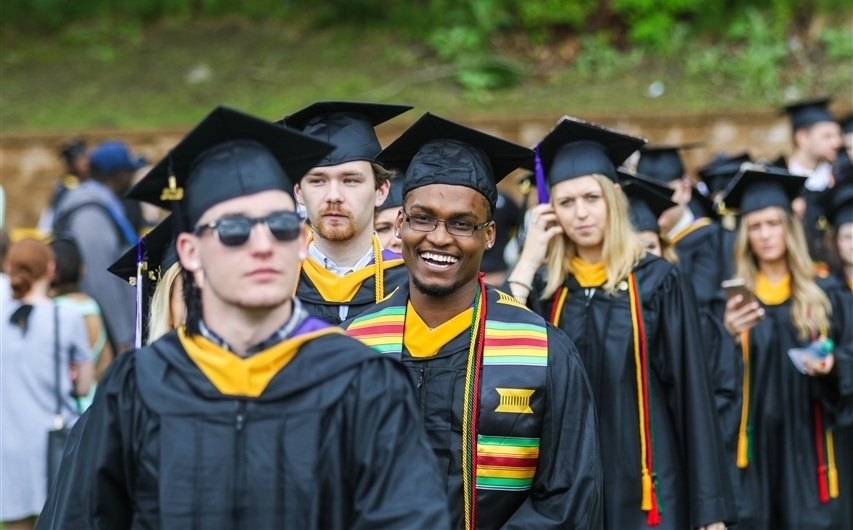 Curry College awarded 709 degrees during its Commencement Exercises on Sunday, May 20, at the D. Forbes Will Athletic Complex in Milton, Mass.

Social entrepreneur Dr. Navyn Salem, Hon. '18 served as Commencement speaker and was awarded an honorary Doctor of Business Administration degree. Salem founded Edesia, a nonprofit organization that helps get high-quality "miracle" food into the hands of the world's most malnourished children.

The College also awarded an honorary Doctor of Laws degree to the Hon. Anthony M. Campo, '79, Hon. '18. Campo, an Associate Justice of the Superior Court in Massachusetts, is a Curry College alumnus and trustee.

Two student speakers addressed fellow members of the Class of 2018. Traditional undergraduate orator Jaimee Geoffrey-White of Turner Falls, Mass., is a first-generation college student who reminded her classmates to "be kind, be resilient, and live in the moment."

Continuing Education and Graduate Studies speaker Mark Reilly of Plympton, Mass., delivered a speech about reinventing yourself. Reilly enrolled in the Curry MBA program when his veterinarian practice was struggling with human resource and marketing challenges. Since applying his studies at Curry to his business model, Reilly has seen his practice grow more than 20 percent.

There were many heartwarming moments including when Matt Weddleton of Brockton received his Bachelor of Arts degree and dedicated it in memory of his father. In 2010, Weddleton's father, Massachusetts State Polic Sergeant Douglas Weddleton, was just six credits shy from earning his degree from Curry when he was killed in the line of duty. In 2012, the College awarded Sgt. Weddleton an honorary bachelor's degree posthumously and presented it to his family.

Moments of special recognition included the naming of five traditional undergraduates as valedictorians after they all achieved a 4.0 GPA ─ Mitchell Anderson of Webster, Mass., Alyson Churchill of Canton, Mass., Ryan Fitzgerald of Cary, N.C., Cassandra Manning of Wrentham, Mass., and Shane Tracy of Bow, N.H. Julia Vellante of Marlborough, Mass., was named salutatorian of the traditional undergraduate class.    In the Division of Continuing Education, Carmen Dos Santos and Joseph Nabstedt, both of Milton, Mass., and Nancy of Plymouth, Mass., were all named valedictorians and Stephen Linskey of Milton, Mass., was named salutatorian.

Briana Dawkins of East Hartford, Conn., received the New Era Award. Each year, the New Era Award is presented to a graduating senior who - by virtue of his or her academic excellence, participation in curricular and co-curricular activities, leadership, accomplishments, and the potential for future achievement - is determined to have contributed most to the enrichment of the Class and the College at large.