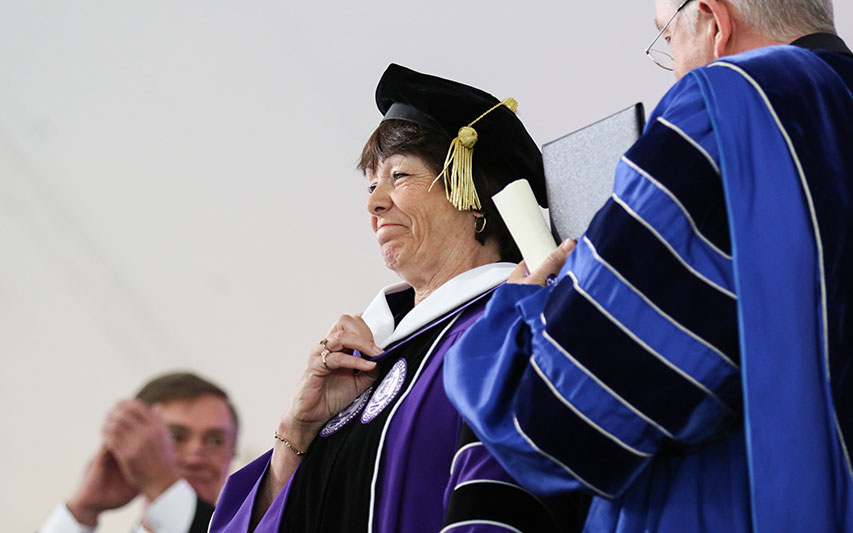 Curry College celebrated its Commencement on Sunday, May 21, 2017, at the D. Forbes Will Athletic Complex in Milton, Mass. Curry College alumna Karen A. Daley '85, Hon. '17, Ph.D., R.N., FAAN, served as Commencement speaker and was awarded an honorary Doctor of Humane Letters degree.

Curry College President Kenneth K. Quigley, Jr., praised the healthcare leader and nursing advocate, highlighting Daley's exceptional service to both the nursing profession and to society, and her outstanding accomplishments as a Curry alumna. President Quigley spoke of how honored he was that Daley began her higher education journey at Curry and go on to receive her Bachelor of Science in nursing from the institution ─ an achievement she has in common with 225 nursing undergraduate students who received degrees today.

"Your life story is compelling ─ it is one of service, courage, sacrifice, and achievement," said Quigley. "It is because of successful alumni such as yourself that Curry is so proud to celebrate the 40th anniversary of Nursing at the College."

Daley spent more than 25 years as a front-line caregiver and staff nurse at Brigham and Women's Hospital in Boston until a needlestick injury infected her with HIV and hepatitis C, ending her nursing career.

"Whenever life takes an unexpected turn like it did in mine - when life at times seems so unfair and beyond your control - because it will - understand that that is the nature of life," said Daley. "It is how you deal with those difficult times that matters most and reveals the most about who you are as a person. Finding meaning and purpose during difficult times will help sustain you." Since her injury, Daley has been actively engaged at the state, national, and international levels as an advocate for use of safer needle devices in practice settings.

Daley was in good company with two student speakers who also offered advice to fellow members of the Class of 2017.

Traditional undergraduate orator Nicole Casey of Norwood, Mass., spoke of the steps and missteps we take along our life's journey. Casey recalled a literal misstep she took on campus during her second week at Curry when she fell down a set of stairs. Though she sprained her ankle and ended up on crutches, she quickly realized how caring and compassionate her fellow classmates and faculty were.

"Wherever Curry is taking you, just know that on your next journey you will take an unforgettable single step to begin your excursion and even if the step leads to you spraining your ankle either literally or figuratively, I promise it is so worth it to keep taking more and more steps. It will lead you to people and places that will impact you forever."

Continuing Education and Graduate Studies speaker Joshua Burt, M.S.N. of Kingston, Mass., started his speech by telling his fellow classmates they can breathe a collective sigh of relief after finishing what they set out to accomplish. Like many of his classmates, Burt did not take a traditional path to higher education, serving in the military for 10 years before beginning a nursing career. He told his classmates to lean into fear, and embrace uncertainty.

"This path hasn't always been easy, and it has required many sacrifices along the way. But determination and drive and sometimes sheer will have been my motivation," remarked Burt.

Moments of special recognition for exceptional academic achievement of the traditional undergraduate class included the naming of three valedictorians who all achieved a 4.0 GPA ─ Brianna Abdallah of Weymouth, Mass., Robert Cammalleri of Richmond Hills, Ontario, and Ellery O'Hara of Toronto. Melissa Linskey of Quincy, Mass., and Salvador Lopez of Rehoboth, Mass., were named co-salutatorians of the traditional undergraduate class.

Jared Berman of Weymouth, Mass. received the New Era Award. Each year, the New Era Award is presented to a graduating senior who - by virtue of his or her academic excellence, participation in curricular and co-curricular activities, leadership, accomplishments, and the potential for future achievement - is determined to have contributed most to the enrichment of the Class and the College at large.