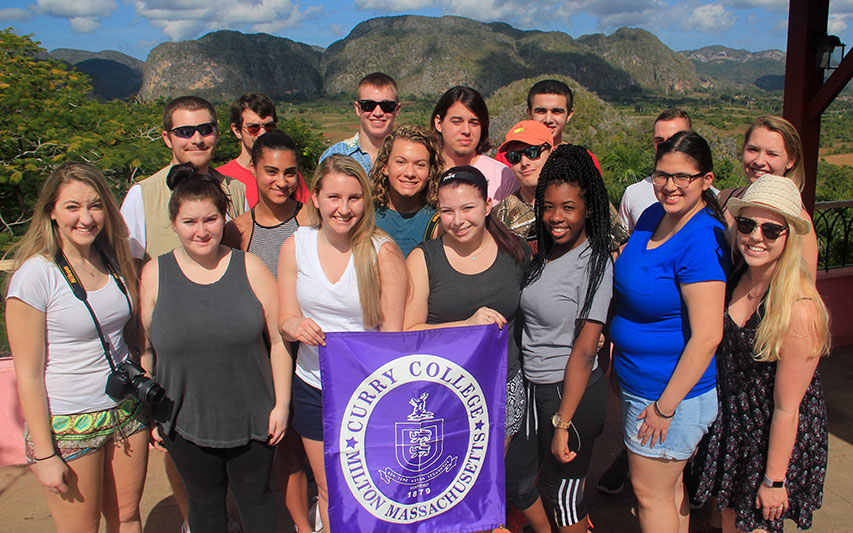 The pouring rain made it hard to see, but as she looked out of her tour bus window, Tori Weden observed cars from the 1950s and old buildings with peeling paint and murals of Fidel Castro and Che Guevara. It was her first glimpse of what would be her home for the next two weeks, and Tori wondered what she had got herself into.

Tori, a Class of 2017 biology major, was one of 17 Curry College students who ventured to Cuba in January 2017 for a study abroad experience. Each student had their own reasons for choosing to study on the once forbidden island. What attracted Tori was the opportunity to visit a third world country; one that her grandparents honeymooned in a year before borders were closed to Americans.

Since 2011, thousands of U.S. college students have taken trips to Cuba for educational purposes after President Barack Obama relaxed travel restrictions. Dr. Grant Burrier, Associate Professor of Politics and History, has been to Cuba several times and advocated for this first-ever Curry excursion to Cuba.

The trip Dr. Burrier organized, "Cuban Politics and Culture" was a three-credit elective course that explored a variety of subjects like the political and economic system, healthcare, agriculture, and U.S.- Cuban relations. The itinerary for the two-week trip was jam packed with visits to museums and historic landmarks such as the Bay of Pigs, the Ministry of Public Health, and organic farms. Each day ended with an interactive lecture back at the hotel.

"What I really want to do is transport the students not only to a different environment, but to a context where they realize what they're learning in class actually matters in the real world," says Dr. Burrier.

Cities the groups visited included the capital of Havana, Santa Clara, Cienfuegos, and Viñales. Students quickly grew accustomed to a simpler life, one with tepid showers, sporadic Wi-Fi at best, meals consisting of rice, beans, pork, chicken, or beef and a deeper appreciation for the Cuban people.

Tobias Sternbach-Le Noury, Class of 2017, was one of two students on the trip who speaks Spanish fluently. Tobias had as many conversations with Cubans as time allowed. One of his most meaningful exchanges was with a man similar in age who recalled growing up during The Special Period of the economic crisis in the 90s when there was extreme hunger.

"He said that as a kid they had to eat soup with banana peels and potatoes for calories because they literally had no food," says Tobias with somber reflection. "It was just crazy to think that he could have died. It makes you feel a lot more fortunate about yourself."

Students found the Cuban people to be refreshingly friendly, outgoing, and generous.

"The Cubans I spoke with have no resentment at all towards the U.S., and say the issues are between governments, not people. They're very hospitable," says Tori.

Kelsey Davis, Class of 2019, enjoyed that hospitality. "Cuban people are passionate and they love to dance. In the streets in the town of Trinidad, there were women who put an audio speaker on a horse carriage and were dancing on the sidewalk. I joined the circle, and they showed me the moves and I was mimicking what they were doing," recalls Kelsey.

Dr. Burrier says by understanding the history you can develop a more complex understanding of reality. "We're told we're not supposed to like Cubans, and they're not supposed to like us because we're capitalists and they're communists. I want students to see that the other is not as foreign, strange, or bizarre as they may be led to believe. We can bridge those divides and we can work together."

Students were impressed by all the things Cuba has accomplished despite its many historical and political challenges. Connor McGuire, Class of 2018, suffers from asthma and during the trip came down with a bad cold and fever. A hotel doctor gave him a check-up for free, and after diagnosing him brought antibiotics and other medications right to his room. The service was free of charge, and all the doctor needed was to see Connor's passport and boarding pass.

"Despite a crippling economic embargo by the United States, The Special Period, and the collapse of the Soviet Union, they have such a lack of resources but they still manage to provide their people with free quality healthcare," says Connor.

"Cuba has a higher life expectancy than the U.S. and a lower infant mortality rate. They've eradicated diseases that plague other third world countries, and that's just one of their many accomplishments. They also basically eradicated illiteracy and homelessness. Even though they have a lot of problems, the fact they've accomplished those things set forth by the Revolution is really inspiring."

Eventually, when it was time to fly back to the States, students who had pre-trip jitters were now sad to leave the island that was starting to feel like home. Overall they were pleased with their decision to study in Cuba during Winter Break.

"Being in Cuba and seeing everything after reading about it was such a great way for me to learn. It was so hands-on and relevant. I learned so much more than I could in a three-month class," notes Kelsey.

Connor agreed, "It put things into perspective for me, and I don't think there is any substitute for being immersed in another culture as opposed to just learning from the classroom."

Most of the students say they would like to see relations between the U.S. and Cuba strengthen and remain open as long as it is beneficial to the Cuban people. Their compassion and concern for their foreign neighbors was all the satisfaction Dr. Burrier needed.

"Part of my job is to produce good citizens for a functioning democracy, and to have the opportunity to present ideas to people, and to remove them from the comfortable confines of their everyday life to allow them to think, ask questions, talk to each other and hear what they're saying is a powerful experience."

At the airport, students bombarded Dr. Burrier with questions about where the next Latin America study abroad trip might be. The jury is still out, but Burrier says one thing is for certain: "We're going to keep developing new things and trying to stimulate minds and change lives."

The trip made a lasting impression on Tori, who is graduating in May and aspires to be a physician's assistant. She is interested in one day returning to Cuba as a volunteer healthcare worker. "This is a trip I will never forget. It really opened my eyes to other cultures."

Read more about the Study Abroad Program at Curry...