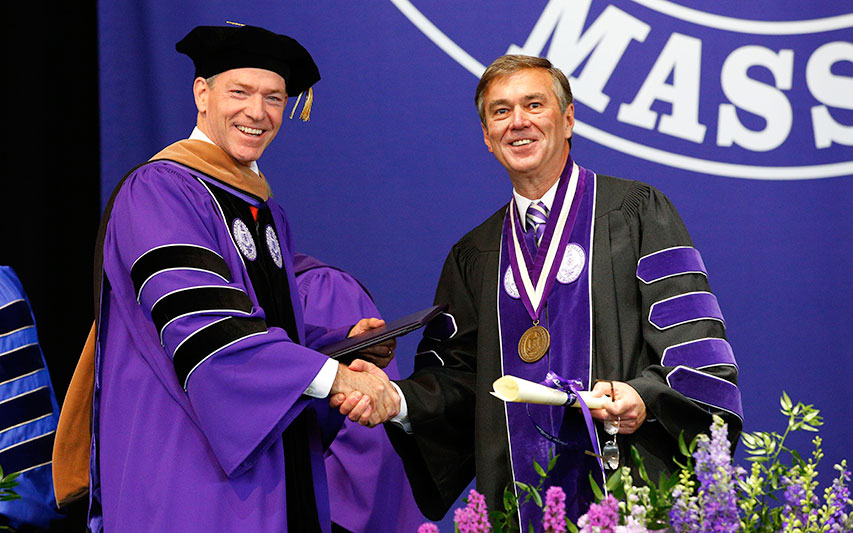 Curry College awarded 754 degrees during its Commencement Exercises on Sunday, May 19 at the Xfinity Center in Mansfield, Massachusetts.

Business, civic, and philanthropic leader John Fish, Hon. ’19 served as Commencement speaker and was awarded an honorary Doctor of Business Administration degree.  Fish is the founder, chairman, and CEO of Suffolk, one of the nation’s leading building contractor companies.  He is also the founder and chairman of Scholar Athletes, which supports the academic achievement of high school students through athletics.

Four graduates of the Scholar Athletes program attend Curry and another will begin in the fall. Solanyel Perez, the first Scholar Athlete to receive a scholarship to college through the program, received her degree in Education from Curry at the ceremony.

“Solanyel’s story is proof that love has a ripple effect that has no boundaries. If you change one thing, you can change many others,” said John Fish.

Krysteen Viera Ribeiro of Randolph, Massachusetts served as the Class of 2019 Student Orator.

Moments of special recognition included the naming of Brendan Prendeville of Quincy, Massachusetts as the traditional undergraduate valedictorian.  Traditional undergraduates Elisabeth Geggis of Topsfield and Kimberly Livingstone of Raynham, Massachusetts were named salutatorians of their class.  Jason Cullen of Weymouth and Wayne Furtado of Plymouth were recognized as the continuing education student valedictorians of their class.  Gabriel Agaman of Plymouth was recognized as the continuing education student salutatorian.

Victoria Parks of Cumberland, Rhode Island received the New Era Award.  Each year, the New Era Award is presented to a graduating senior who – by virtue of his or her academic excellence, participation in curricular and co-curricular activities, leadership, accomplishments, and the potential for future achievement – is determined to have contributed most to the enrichment of the Class and the College at large.