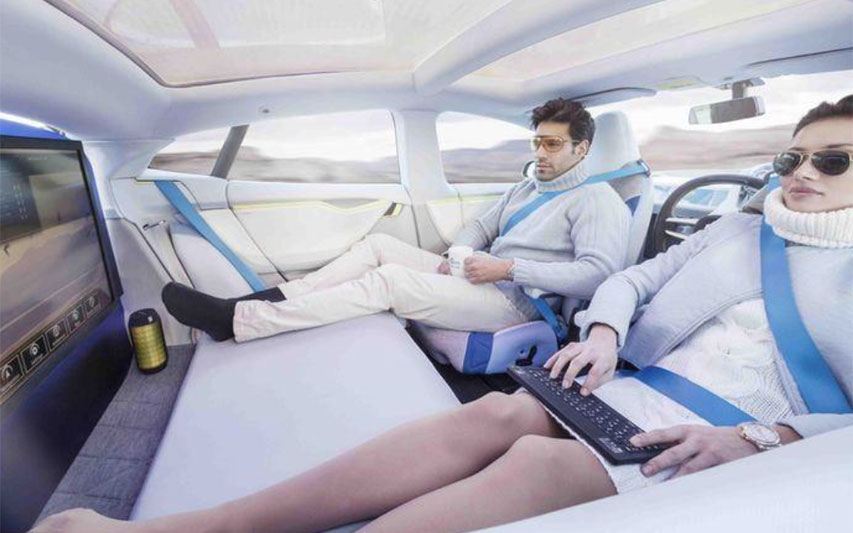 (Above Photo Credit: The Radio Scout)

Imagine a world 20 years from now. Imagine the things that won’t exist anymore. And imagine the new things - things we haven’t even thought of - that will become essential to our being. This was the thought experiment posed to General Education (Gen Ed) First-Year Inquiry (FYI) students Wednesday, September 11 by lecturer David Summergrad as part of this year’s FYI seminar, Earth 2039.

An integral part of Curry’s Gen Ed core curriculum requirement for all students, the FYI seminar is designed to tackle a single issue from varying points of view. So to help focus this wide-ranging exploration, Summergrad and Assistant Professor Alan Revering invited futurist Joe Barkai to filter the week’s discussion through the lens of autonomous vehicles, a perfect jumping-off point for interdisciplinary inquiry.

From a technological point of view, the mobile-phone-like ubiquity of self-driving cars is speeding toward reality, says Barkai. a speaker and author who focuses on forecasting the strategic application of technology innovation in the automotive space.

Self-driving cars have been a part of our collective imagination at least since the 1950s when science fiction and a booming automobile culture coalesced with visions of families playing board games while their sedans rushed them down American highways. But in the decades since, little technological development occurred. That is, until the fairly recent explosion of feasible self-driving prototypes created by tech giants Alphabet (Google), Tesla, and Amazon along with models developed by traditional automakers Ford, General Motors, and Mercedes Benz and others, have leapt onto the scene.

But, Barkai notes, the last mile is the hardest.

Despite the consensus view that self-driving cars would reduce auto fatalities, curtail congestion, diminish waste, and provide dependable transportation to the elderly and disabled, Barkai estimates that it could take some 20 years before these improvements crystalize. Feasibility questions abound. “I’m concerned about the insurance companies,” FYI student Patrick Bernard (Class of 2023) commented. “These and other companies have a huge interest in making sure self-driving cars stay off the road.”

And there are ethical questions. For example, who should be held liable when a self-driving car is involved in an accident? How does an autonomous vehicle “decide” which impediment (human or otherwise) to steer toward during an unavoidable collision? And even if these questions are answered, how do we know that society is ready to adopt this technology?

This type of cross-disciplinary investigation is an apt example of an FYI seminar. As the cornerstone course of Curry's General Education program, the FYI introduces students to thinking in the liberal arts through an examination of topical, relevant, real-world issues.

“We try to choose topics that involve thinking from a lot of different points of view, like economics, psychology, and ethics,” Revering says. “It’s an introduction to problems that require you to pursue them through a variety of academic disciplines.”

The Gen Ed curriculum was first introduced at Curry in 2016, and the Class of 2020 is the first graduating class to have a complete 4-year Gen Ed experience, including the FYI seminar. “It’s our belief that although you’ll focus on a particular discipline down the road, you need broad exposure to different ways of thinking and researching about the world,” Revering says.

As for self-driving cars, “It won’t happen overnight,” Barkai says. “In fact, it may take longer than we think. The mix of smart cars and stupid drivers is a very challenging condition,” he jokes. This will be particularly true if society doesn’t value thinkers who can explore a societal issue from multiple disciplines and provide solutions that consider varying perspectives.