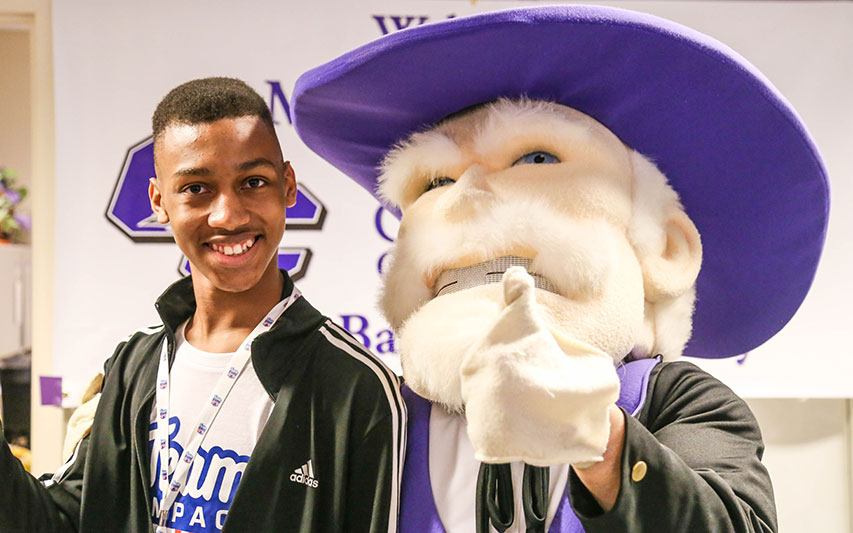 In February 2018, the Curry College Men's Basketball Program recruited Malachi, an eighth-grade student at O'Donnell Middle School, to join their roster. Shortly after he was born, Malachi was diagnosed with Hemophilia B, and because of his condition, he cannot play organized sports.

The Curry Basketball Team welcomed Malachi to the family during a special "Draft Day" ceremony. In front of his family and teammates, he made it official by signing his letter of intent. Next, he suited up in his Curry uniform, donning number 15, and hit the Katz Gymnasium for basketball practice, where he drained a sweet top-of-the-key shot in front of reporters.

Malachi's new coach says drafting Malachi was the easiest recruiting decision he has ever made.

"It's not all about wins and losses. It's about how you can change someone's life and hopefully, we've done that for the better today," said Matt LeVangie, Men's Basketball Head Coach.

Sophomore Nick George is one of Malachi's mentors on the team.

"He just brings that extra energy, which is hard for us to get sometimes," said Nick. "Looking at him and watching him cheering us on from the sidelines motivates us."

Facebook: Check out the photos from Malachi's Draft Day

Malachi is the ninth child to join Curry Athletics through Team IMPACT. The College began its relationship with Team IMPACT in January 2012 when the Men's Hockey Team drafted 12-year-old Sean Bennett onto their roster. Since that time, Athletic Director Vinnie Eruzione has spearheaded the effort at Curry, and the baseball, football, women's lacrosse, softball, basketball, and volleyball teams have all drafted children onto their roster.

Listen to what this experience means to Malachi's family on WBZ Newsradio 1030...