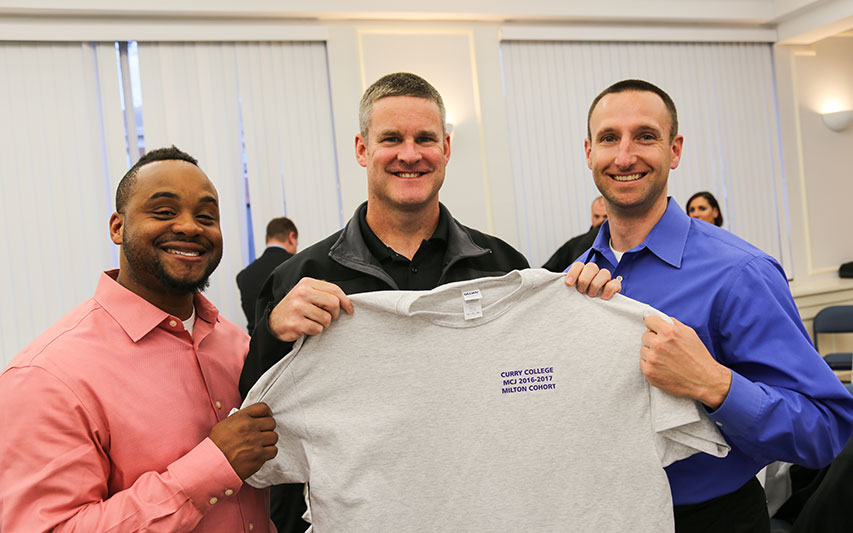 Every day, thousands of police officers suit up and report for duty in precincts across the United States. Whether they live in a big city or rural America, the challenges and pressures of the job are considerable.

Graduate students in the Curry College Master of Arts in Criminal Justice (MACJ) program spent the better part of a year researching two particular issues confronting law enforcement and the communities they serve. Students worked under the direction of MACJ Co-Directors Dr. Jennifer Balboni and Dr. Rebecca Paynich and faculty field supervisors Dr. Peter Hainer and Dr. Adam Stearn. In May, both of the MACJ cohorts presented their final Capstone projects, which included their findings and recommendations for local law enforcement agencies.

Relations Between African-American Men and Police

To do this, the Curry students worked with the College's Institutional Review Board to design a narrative analysis study and then interviewed African American men inside and outside the justice system. They went inside the Plymouth County Correctional Facility in Plymouth, Mass., and conducted intensive interviews with nine African-American male inmates. The cohort also interviewed six additional African-American male community members outside of the prison. All of the men ranged from 20 to 70 years and had different backgrounds and education levels.

Below are some of the themes that emerged from these conversations:

The Golden Rule matters: Participants emphasized the importance of being treated with respect and several cited a lack thereof from law enforcement they've encountered and the impact it had in shaping their feelings about law enforcement.
Impact of media: Media has sensationalized crime, and social media is making our society more divisive with its obsession with race issues.
Feeling of vulnerability: Participants recalled feeling tense and at times targeted because they "fit the profile" because of their race.
Fear of the gun: Based on media reports and their own experiences, many acknowledged the anxiety they have during interactions with police, knowing the officers carry weapons--which could potentially end their lives in a moment.
Good cop/bad cop:  Respondents conveyed they were able to distinguish the good police officers from the bad ones--even when situations had potentially negative outcomes (such as arrest).

After completing their analysis, students made several recommendations for improving relations between the African-American community and law enforcement:

Strengthen procedural justice: Use problem-solving policing to target dangerous people and stop harassing others.
Enhance community policing: Police need to be in their communities in non-law enforcement roles, hosting events such as barbecues and attending baseball games. Such initiatives have lowered and increased police legitimacy in the past.
Support emotional well-being of officers: Implement peer support groups for law enforcement to help process stress.
Implement to identify potential biases: Conduct implicit bias awareness tests to help officers determine their own bias and how it impacts their work.
Centralize de-escalation techniques through training: Show respect and avoid a rush to judgment by creating physical distance and taking more time to listen.

Members of the cohort took part in an implicit bias test themselves, to see what beliefs might influence their decisions on the job. They are using their findings to create an in-service training for law enforcement in Massachusetts.

Crime and Disorder in and around Franklin Park: Analysis and Recommendations

Spanning 527 acres, Franklin Park is Boston's largest and is policed by the Boston Park Rangers, the Boston Police Department (BPD), and the Massachusetts State Police. Preserving the park and keeping it safe is a top priority for law enforcement.

As part of their collaboration with BPD, MACJ graduate students in the Milton cohort examined crime and disorder in and around Franklin Park by analyzing calls-for-service data, community observations, and survey responses from the community.

Students made several recommendations on how to make the Franklin Park community safer, using Crime Prevention through Environmental Design (CPTED) models. One of their key initiatives was assisting in the development of the Franklin Park Community Application, a smartphone app that allows park users to report an incident or a quality-of-life issue in real-time. The app is able to identify the user's exact location at the time of the report, and users can upload photos and brief descriptions of what they observed. Another benefit to the app is it keeps park users engaged and informed about general information and upcoming events.

Since the park is so vast and borders three different Boston neighborhoods, students suggest that increased communication between Boston Park Rangers, BPD, and other neighboring law enforcement agencies would be beneficial. Other recommendations include having Boston Park Rangers participate in the Boston Regional Intelligence Center's daily conference call, identifying specific jurisdictions per agency, and exploring the possibility of mutual aid agreements between agencies.

Students also presented ideas around better park maintenance and upkeep, surveillance and lighting, and increased signage. The cohort shared the analysis and recommendations with the BPD Commissioner's office, as well as city councilors who represent constituents in the vicinity of the park.

Learn more about the MACJ program...