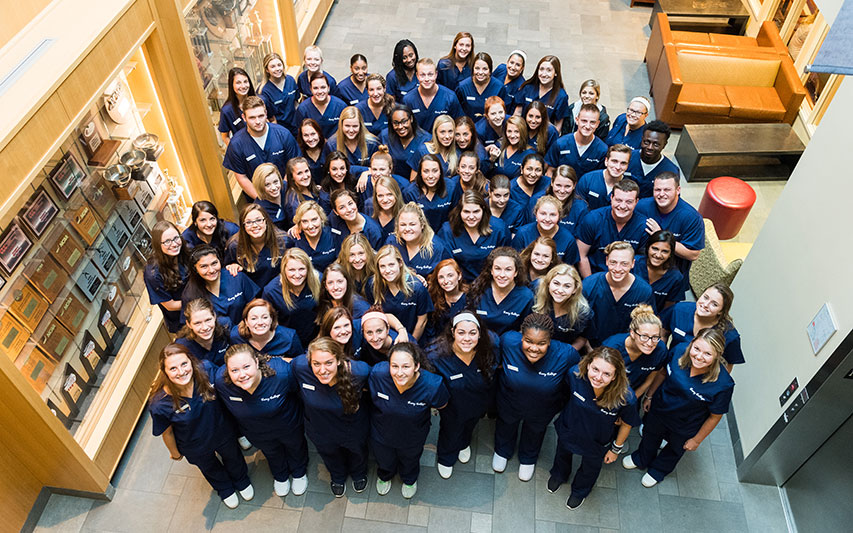 The School of Nursing held their first annual Nightingale Ceremony on Tuesday, September 6, 2016, in the Katz Gymnasium. Named for the founder of modern nursing, Florence Nightingale, the event celebrates Curry Nursing students in their second year of the program as they begin their clinical education in area hospitals.

A duo of esteemed alumni, both practicing nurses at New England Baptist Hospital, were invited back to campus to share their clinical experiences and give words of encouragement to the students in attendance.

Laura Morgan, RN '13 shared the story of how, during her senior year preceptorship at a local hospital, she was influenced by the compassion of an ICU nurse conducting post-mortem care on a patient.

"Identify qualities in the nurses around you that you want to take with you in your careers," said Morgan. "As you enter your first clinical rotations, lay the foundation for the type of nurse you want to be."

Samuel Babchuck, RN '15 stressed the importance of trust in the nurse-patient relationship, recalling his first interaction with a patient at clinicals, a colorful, 90-year old man who told Babchuck he only wore his best basketball sneakers out on dates.

"Every day you are going to meet new people from different backgrounds with different stories.  It will be up to you, as their nurse, to empathize with them, to see where they are coming from, so you can best advocate for them. You'll soon realize just how much they trust you. You won't be a kid in their eyes, you'll be a professional."

After reciting the Nursing Student Pledge, each of the approximately 80 students in attendance were invited on stage to receive the Nightingale pin and sign their names in the Nightingale Book, affirming their pledge to the profession. The pins were presented by Mariana Delgaudio (Class of 2017) President of the Curry College Student Nurses Association (CCSNA).