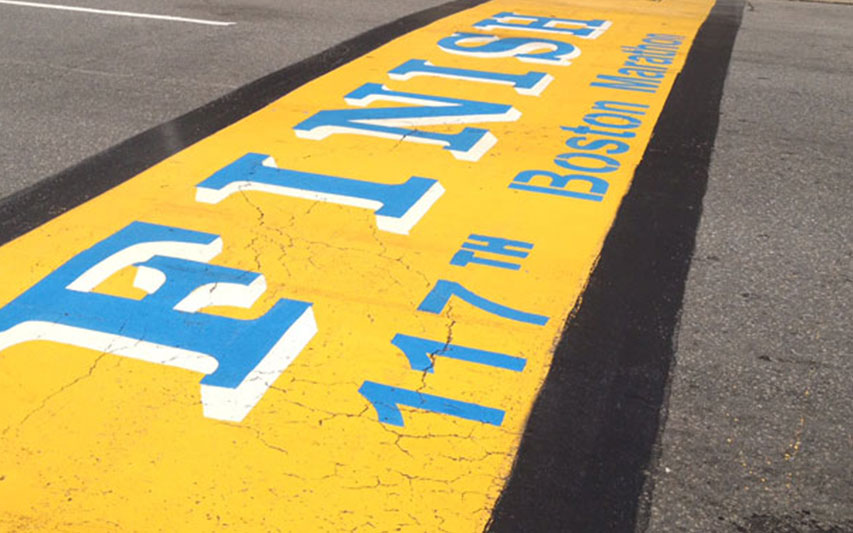 There are several Curry College connections to the long-anticipated film "Patriots Day," about the 2013 Boston Marathon bombings.

In the spring of 2016, the "Patriots Day" film crew shot pivotal scenes recreating the actual bombings at the marathon finish line on a reconstructed outdoor set in Weymouth, just down the road from the Curry campus. Brett Duffy '16 (communication) was interning at Boston Casting when a call came in from movie producers looking to fill the scene with more than 500 extras.

"Extras casting is probably the hardest casting. Boston Casting employees were working on their days off and some of them even slept on just because you are always on call," said Brett. "They told me that if production calls and needs 50 people in the next hour there is no excuse, you have to find those 50 people and provide them immediately."

Brett was also surprised when she learned that if producers were looking for an extra to play a police officer or medical personnel, they would actually try to cast people who work in those professions.

Meanwhile, when Curry Class of 2018 Communication major (television/film) Nick Deveau learned they were looking for extras, he jumped at the opportunity to see a film being made up close. "I was able to see all the things I've learned in the classroom play out in real life and on the big stage," said Nick, who was interested in either being a runner in one of the extra scenes or playing a spectator in the crowd.

But Nick's role as an extra took a turn when the film's director, Peter Berg, called on him to participate in a specific scene. While Nick couldn't go into detail on what the scene entailed, it took nearly half a day of shooting to complete, and he got to know Mr. Berg, known for "Friday Night Lights" and "Lone Survivor," on a personal level.

"Peter and I would see each other and talk about that scene," said Nick. "One morning we talked for a half hour or so before filming, and it was a very genuine conversation. He puts his heart and passion behind his work and makes sure everyone is taken care of."

Another Curry communication alum, Macayla Botelho '16, a former intern at Boston Casting, also answered the call for the shoot. "In one scene I was standing next to Mark Wahlberg, and he introduced himself and asked how I was doing. He was very humble and nice," said Macayla. "Being able to see him act and have the opportunity to be in a scene with him was an unforgettable experience."

For Brett, another huge moment came when she, too, was asked to be in a specific scene. "The set looked exactly like Boylston Street, and it really seemed like I was in Boston," said Brett. "Watching all the actors run, and listening to everyone cheering, looked and felt like a real marathon.  Everyone was so friendly and willing to help with any questions that I had."

One takeaway that all three students will never forget was the incredible professionalism that they witnessed up close.

"The amount of knowledge I took away from this experience is immeasurable," said Nick. "Learning how to be on set, and what it takes to make it in this business, was incredible. Every day on set was a blessing, and that's truly what it was working with Peter Berg and his team."

For Brett and Macayla, their next stop is to pursue acting and filmmaking in Los Angeles, where they both moved this summer, joining a large contingent of other Curry film and television alumni out on the West Coast.

"One piece of advice I would give to anyone, and this applies to on the set of a major motion picture or in everyday life: Never be the one who walks with their head down. Talk to everyone because you never know who you're going to meet. We talked to everyone on set and met people who were from all over the country, many from California, and they were more than willing to help me in any way possible," added Brett.

For Nick, "Patriots Day" turned into the starting line for many more movie roles over the summer and into the fall, as other Hollywood blockbusters set up shop for filming in Beantown.

As is true in Hollywood, not everyone makes the cut. Be sure to check out "Patriots Day" at your local movie theater to see which of our Curry students and alumni made it onto the big screen.