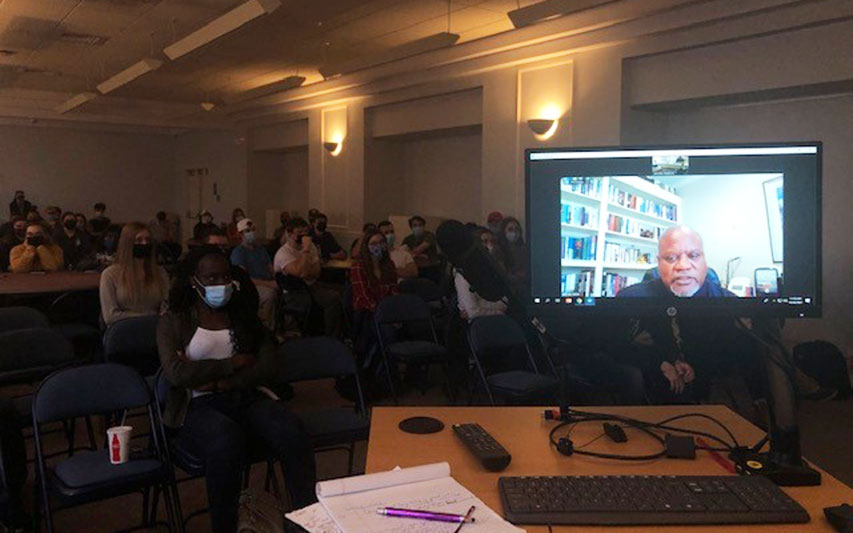 Students in Criminal Justice and Sociology Professor Jennifer Balboni’s Criminal Procedure and Professor Stephanie Capadonna’s Justice and Human Rights classes heard (virtually) from Attorney Ray Charles Carter, the lead defense attorney in four of the six trials of Curtis Flowers, who was charged with a quadruple murder in Winona, Mississippi.  The case was the subject of an award-winning podcast, In the Dark.

Carter talked about his involvement in the Flowers case, his frustration with having to repeatedly fight what seemed like insurmountable odds, and the imperative to save his client’s life. “I couldn’t just let them go up and railroad this person,” he told the students.

Flowers' first three trials ended in convictions and a death sentence. Each of these convictions was appealed and overturned on the grounds of prosecutorial misconduct by the Mississippi State Supreme Court. The fourth and fifth trials ended in mistrials (i.e., a hung jury). Flowers was convicted and sentenced to death again in 2010 in his sixth trial. This conviction was appealed and reached the U.S. Supreme Court, which in 2019 overturned the conviction ruling that prosecutors excluded African-Americans from the jury in violation of Flowers' Constitutional rights to due process of law, including the right to a fair trial.

The second season of the In The Dark podcast systemically investigated the prosecution’s case uncovering the fact that multiple witnesses recanted and others admitted to lying in order to get some benefit in their own cases or for money. The podcast producers/investigators discovered exculpatory evidence (i.e., information suggesting Flowers’ innocence therefore negating his guilt) that the prosecutor failed to turn over to the defense as required by Constitutionally protected due process rights of any person charged with a crime.

Carter also talked about growing up in the deep South, race relations, and his work in public defense. “Sometimes I win, sometimes I lose, but I’m always gonna’ fight… I became a lawyer to fight the system—not join it,” said Carter.

Curry students had listened to the podcast and asked Carter cogent questions, including what the most frustrating part of the case was for him, what were his strategies in different trials, his feelings about the podcast, and the challenges of trying to seat an impartial jury in each of his client's trials. Carter encouraged students by saying, “Learn all that you can ... ascribe to be honest and fair…you’ll force the system to get you what you deserve.”  This was the second time he has visited Balboni’s class.