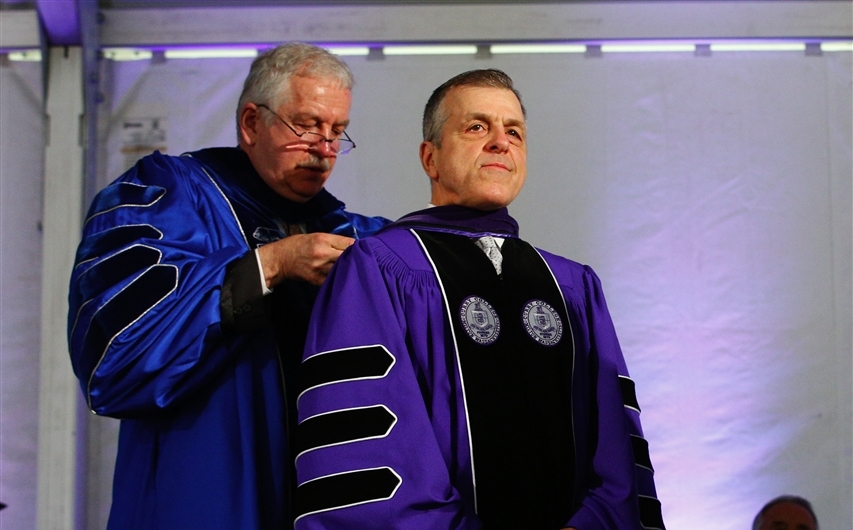 During Curry College Commencement Exercises on Sunday, May 20, the College awarded an honorary Doctor of Laws degree to the Hon. Anthony M. Campo, '79, Hon. '18. Campo, an Associate Justice of the Superior Court in Massachusetts, is a Curry College alumnus and trustee. He has been a member of the College Board since 2005 and served as board chair for seven years.

Campo, who grew up in Cambridge, studied hard and excelled in the classroom and as a student-athlete at Curry College, where he met his wife Diane Morrissey Campo, an alumna from the first Nursing class of 1981. After graduating from Curry with a Bachelor of Arts, he received his doctor degree from New England School of Law. It was one of his Curry professors who sparked and encouraged his belief that he could attend law school and become a lawyer.

Prior to his judgeship, Campo served as the Managing Partner of Boyle, Shaughnessy & Campo, P.C., a firm of which he was a founding partner and which has grown to 65 attorneys practicing in seven states.

President Quigley commended Campo for his service to the legal profession, the State of Massachusetts judicial system, and his outstanding endeavors as a Curry alumnus.

"Your accomplishments, your service, and your contributions to society bring honor to our College and validate our College mission," said President Quigley. "It is because of successful alumni such as yourself that Curry continues to be a vibrant and dynamic institution."