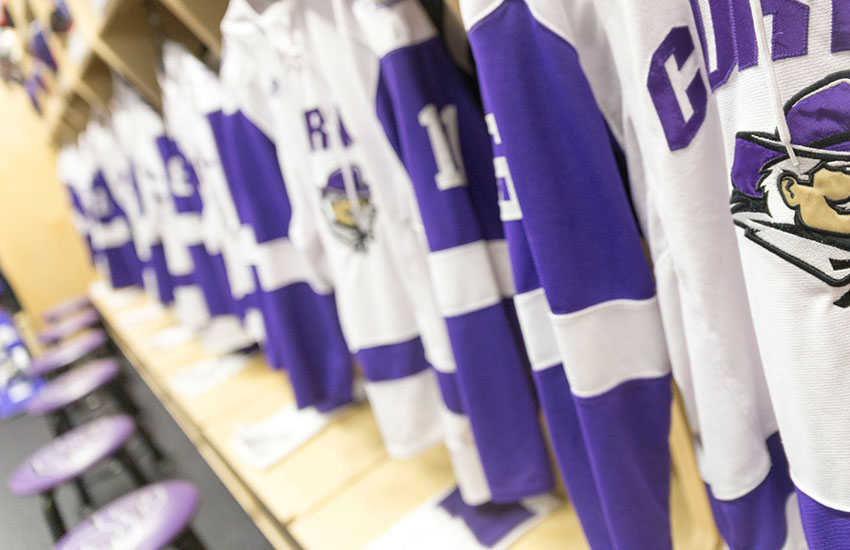 "We could not be more excited to offer a women's ice hockey program at Curry College," says President Kenneth K. Quigley, Jr. "Like all of our sports, hockey provides a unique opportunity for student-athletes to grow both as players and as people. We know that our student-athletes make a tremendous commitment to their sports while simultaneously working hard academically. We're pleased to expand Curry's athletic offerings in support of their passions, and we hope by adding a women's varsity team that we can encourage new student-athletes to join our hockey program."

The Commonwealth Coast Conference will assume the operation of the Colonial Hockey Conference and sponsor women's ice hockey as a championship sport starting in 2020-21. Curry joins seven other schools - Becker College, Endicott College, Nichols College, Salve Regina University, Suffolk University, the University of New England, and Western New England University - in the renamed league. The College begins a national search for a head coach this month.

"For several years, we've been actively considering adding women's ice hockey to Curry," said Vinnie Eruzione, director of athletics. "The recent growth of the NCAA Division III league, coupled with our move to the Canton Ice House, positioned us well to begin the women's program. We are thrilled to be among other collegiate leaders helping to grow the sport in the Northeast."

The Canton Ice House is now the new, state-of-the-art home to both men's and women's ice hockey programs. Located seven miles from the Milton campus, and featuring two NHL- sized ice rinks, the newly constructed complex is the premiere skating facility for the area's largest youth hockey programs. Curry's hockey community can now cheer on the team from stadium-style seating or enjoy a full-menu café on the mezzanine level, which overlooks both rinks. The Canton Ice House also features a pro shop, a game room, and two indoor golf simulators. View photos

Curry joins nearly 70 schools nationwide, currently fielding women's hockey teams at the Division III level. The number includes several members of the CCC, where all Curry athletic teams compete. Women's hockey is becoming one of the fastest-growing collegiate sports in the world. USA Hockey's women's registration in 2017-18 was nearly 6.5 times greater than the growth in men's registrations. Curry is the latest institution to join this trend in this ever-growing game.

WHAT OTHERS ARE SAYING ABOUT CURRY'S ADDITION OF WOMEN'S ICE HOCKEY

"I am excited about the addition of women's hockey at the varsity level. It will bring excitement to our campus and grow the terrific sport of women's hockey. It will be a great relationship with our team, and this decision demonstrates a great commitment to ice hockey from Curry College." – Curry College men's ice hockey Head Coach TJ Manastersky

"As a young athlete, I've played in several male leagues to have the opportunity to play the sport I love. With a new women's ice hockey program at Curry, I think more young women will come here to have an opportunity to not just compete at the collegiate level but to also to be a part of the close sports community," – Nicole Bousquet '21, Curry College Independent Women's Club Hockey Team Member

"It is really exciting that we will be adding a varsity women's hockey team at Curry. I think it's great that we will have another high-level hockey team at the school and that they will also have access to the amazing facilities at the Canton Ice House. It should be exciting to have them playing alongside us." - Curry College men's ice hockey senior captain Jordan Williamson '20

"The CCC is extremely excited about the addition of women's ice hockey at Curry College. Last October's announcement that women's hockey would become the CCC's 19 championship sport in the Fall of 2020 was one of the conference's biggest stories in our proud history. Learning that Curry will give the CCC an eighth women's hockey program in the Fall of 2021 is great news for both the College and our conference. The CCC and our member institutions are playing a key role in growing an exciting sport in hockey-rich New England and across the entire nation, as we continue to grow championship opportunities for young women. Welcoming a new varsity program at Curry is a significant step in continuing that growth." – Commonwealth Coast Conference Commissioner Gregg Kaye

"I was thrilled to learn of the addition of a varsity women's ice hockey program at Curry. It is especially exciting as the Commonwealth Coast Conference has announced it will be sponsoring a conference championship in women's ice hockey beginning in 2020-21." – The University of New England Director of Athletics / SWA / Title IX Deputy Heather Davis

"We are extremely excited to see another CCC member adding women's ice hockey! It is great for the sport and for our conference. We know the addition of their program will enhance the overall competitiveness in the CCC for years to come." – Nichols College Director of Athletics Eric Gobiel