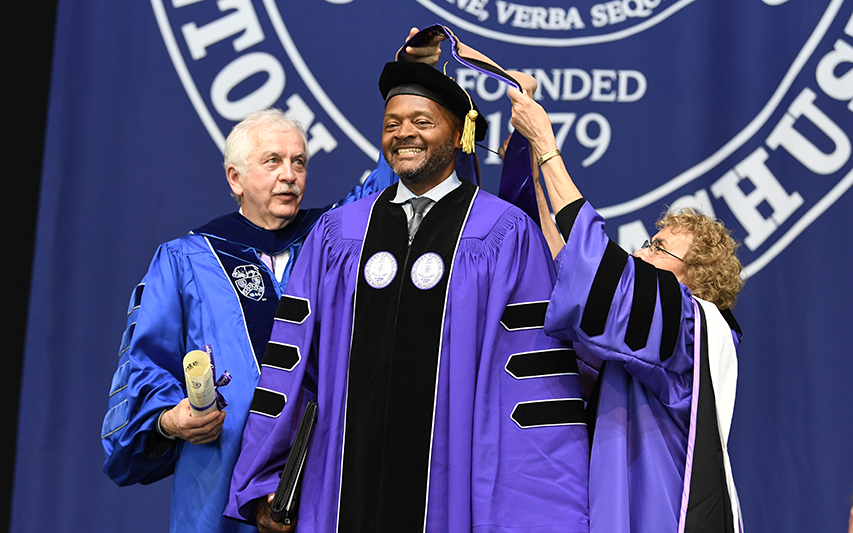 Curry College honored 661 graduates from the Class of 2022 during its 142nd Commencement celebration in summer-like conditions on May 22. The ceremony was held at the Xfinity Center in Mansfield, Massachusetts with family members, friends, alumni, faculty, and staff among other Curry community members in attendance. President Kenneth K. Quigley, Jr. presided over the event.

Public health and civil rights leader Michael Curry, Esq., served as Commencement speaker and was awarded an honorary Doctor of Business Administration degree. Curry is the President and CEO of the Massachusetts League of Community Health Centers, the Commonwealth’s crucial network of 52 health centers with over 300 sites serving one million patients in high-risk areas. He coordinated the community health center response to the pandemic and served on numerous state and national COVID-19 taskforces, while also addressing inequities in healthcare.

Curry reminded the Class of 2022 that they have a purpose, encouraged them to “dream big,” and to also confront and tackle important issues of today such as inequity, racism, and hate. “What are you prepared to face? Are you willing to utilize whatever privilege, or position of influence or power you have to deliver on the promise of this democracy? Or as the African proverb reminds us: rivers are filled one drop at a time. Will you teach equitably? Will you provide care in a culturally competent and proficient way? Will you dispense justice fairly? Will you seek to build back better in a way that truly lifts all boats? Will you speak up when hate is in your presence? Will you allow truth to catch up to history by revisiting the nation’s past and connecting the dots to the inequities of today?”

In his address, Class Orator Alex Bouchard of Winnipeg, Canada, spoke about the twists and turns for the Class of 2022 as they navigated college during a pandemic. “Maybe the most important lesson that Curry taught us over the last four years isn’t something that can be found in any textbook. It's not something that you can Google or find in a lesson plan. Maybe, what Curry has taught us is to look fear and uncertainty straight in the eyes and take it head-on. Because we know, no matter how tough the waters are ahead, we can find our way.”

Nicholas John Corso of Exeter, R.I., received the New Era Award. Each year, the New Era Award is presented to a graduating senior who–by virtue of their academic excellence, participation in curricular and co-curricular activities, leadership, accomplishments, and the potential for future achievement–is determined to have contributed most to the enrichment of the Class and the College at large.

Corso, a Criminal Justice major, earned a spot on the Dean’s List every semester and was inducted to the Alexander Graham Bell Honor Society and Alpha Phi Sigma. Outside the classroom, he was a four-year member of the Men’s Soccer team, acting as team captain for two seasons. He was the President of the Student-Athlete Advisory Committee, a member of the Student-Athlete Leadership Group, and SGA Class President for two years. He worked with Team Impact and various other community service events like the Milton Monster Dash, and worked for the Public Safety department. He will pursue his Master’s Degree in Criminal Justice at Curry through the 5th year Master’s Program.

The summer heat did not dampen students’ excitement as they waited to process into the arena. Nursing student Zoe Scangas ’22 said she was “grateful and emotional” and her friend and fellow nursing student Kaylee Doherty ’22 said, “I feel pride. I’m very proud of myself and all my friends, and I’m thankful for the community that led us to where we are today.” Criminal Justice major Gladys Flores ’22 said, “I feel happy and blessed at the same time. I’m ready to go into the real world, and I feel I’m prepared to take over the world!”