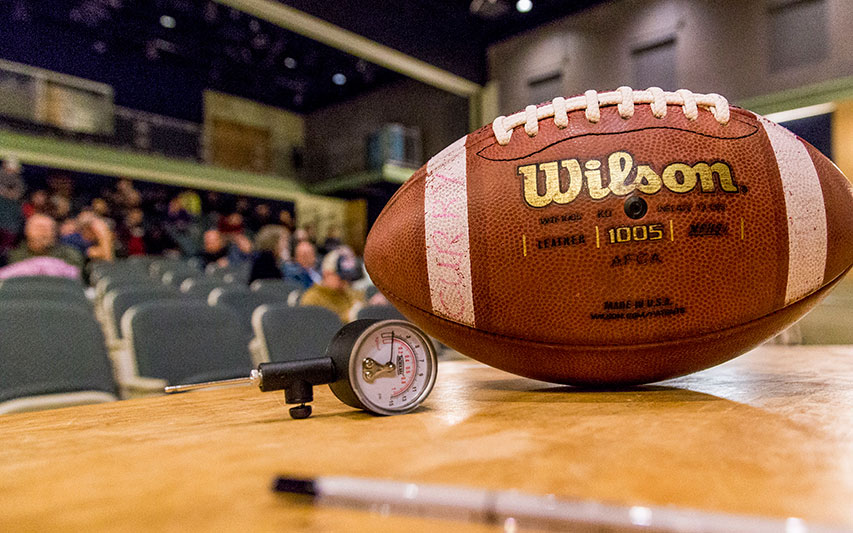 This documentary film is not about what you think it’s about.

Yes, Four Games in Fall, which screened Wednesday at Keith Auditorium, tells the story of the Deflategate scandal, the controversy involving the allegation that quarterback Tom Brady ordered the deliberate deflation of footballs used in the New England Patriots victory against the Indianapolis Colts in the American Football Conference Championship Game of the 2014 - 2015 NFL playoffs.

But it’s about so much more. “It’s not really about Deflategate,” says writer and director, Julie Marron. “It uses Deflategate as a point of entry into media manipulation, science-for-hire, and perversion of the legal system.”

Specifically, the film shows how a basic scientific principle such as the Ideal Gas Law gets lost in media spin and litigation.

“We all think we know the story,” adds Professor Bill Nancarrow, chair of the Politics and History Department at Curry. “The protagonist is Tom Brady, who was accused of deflating NFL game balls. And the antagonist of the story is NFL Commissioner, Roger Goodell.”

Instead, Marron and Producer Ami Clifford posit, the protagonist of the story is actually the Ideal Gas Law, a scientific principle that the film highlights as demonstrative exculpatory evidence that should have made Deflategate an open and shut case exonerating Brady.

The film reaches beyond football to show that the tactics used by the NFL in this scandal are not unique, but are frequently replicated to manipulate public opinion, influence government regulation, muddy the waters around science, and impact the outcome of notable court cases, including those involving the tobacco industry, asbestos-related illness, and other public health concerns.

It is its interdisciplinary exploration that makes the film an exemplary work for students of the Arts and Sciences, as well as the Curry community at large, to experience on campus.

“Our Arts and Sciences programs are built around three basic ideas,” says Nancarrow. “Interdisciplinarity, innovative thinking, and life-long learning.” Within 10 minutes of seeing the film for the first time, Nancarrow said he knew he had to bring it to campus.

In the spirit of interdisciplinarity, Nancarrow invited Dr. Jessica Fry, Professor of Biology, to demonstrate the Ideal Gas Law in action. Fry measured the pressure of a football before the screening then left the ball outside for the duration of the film. Afterward, she measured the pressure for a second time, showing a 1.6 psi drop in air pressure, exactly as the Law predicts. And within the variation found in the footballs tested back in 2015.

Documentary film students were also invited to meet with the filmmakers, Marron and Clifford, before the screening to talk shop and gain insight into the documentary filmmaking process.

“The session provided invaluable insight,” says Mahlon Hanifin ’21, a Communication major who is minoring in Film. “We had the opportunity to discuss with the filmmaker how a film is made financially. She also addressed obstacles that get in the way, including permits to film on location and licensing agreements. I think it’s fantastic that Curry organized both the screening and the meet up beforehand.”

Marron says she’s not necessarily even a football fan. But while driving with her friend, listening to sports radio, she was taken by how Deflategate had become the biggest story in the news. Then she realized the story ran deeper. “What a fascinating topic,” she remembers thinking. “What a great way to showcase some of these issues - like the intersection of science and the legal system - that impact all of us in so many ways.”