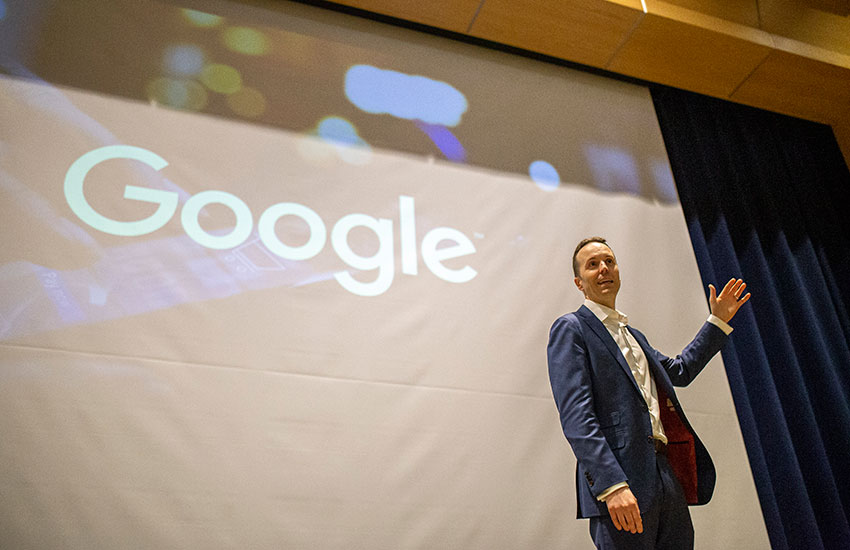 “Machine learning won’t figure out what questions to ask.”

That quote, which appeared in Don Batsford, Jr.’s coffee as foam art one morning, describes something integral to Google’s mission as the most visited website in the world, to “organize the world’s information and make it universally accessible and useful.” As Head of Industry at Google, it’s Batsford’s job to ask the right questions to translate data into profit for Google’s largest and most sophisticated advertisers.

On March 2, he shared his thoughts on “Marketing in the Age of Digital Assistance” with Curry students, faculty, and staff. Batsford was hosted on campus as part of the Business Management department’s Signature Business Speaker Series.

Batsford has been at Google since 2014, initially as an Industry Manager/Senior Account Executive, until 2018, when he became Head of Industry. With over 20 years of marketing and advertising experience, including founding two digital agencies (31 Media and MAQQ), he currently leads the Digital Marketing Experts, Data Analysts, and Media Specialists teams at Google. Partnering with Chief Marketing Officers of advertisers, he and his teams help grow their businesses across a range of products.

Dr. Shavindrie Cooray, Associate Professor of Business Management and organizer of the event, welcomed Batsford to Curry. “This is a great opportunity for our students to hear from an industry leader.”

The theme of machine learning (ML), in which computer systems “learn” from patterns and inferences in data to perform better, was key to Batsford’s talk. He described the current technological and social moment as the “Age of Assistance” in which consumers are more “curious, demanding and impatient” than ever before. Using examples from actual Google search data, he illustrated a 2020 culture in which consumers expect to have personalized responses to their every query literally at their fingertips on their smartphones, and in which a brand’s “ability to leverage data to anticipate their needs will define its ability to grow.”

Google’s philosophy of not “Human v. machine,” but rather “Human + Machine,” in which the marriage of data with human insights is the key to success, was illustrated by the ways in which the company uses marketing automation to customize information to each consumer as an individual.

Batsford’s talk was followed by a lively Q&A with students, in which questions ranged from cloud-based work and privacy concerns to the future of retail and challenges for small businesses in the information-rich marketplace. To a query about the future of computer science jobs and the value of learning to code for this generation of students, Batsford replied:

“I can’t tell you what your job will be, but I can tell you that there will be computers, and there will be people. If I tell you to get good at computers and get really good at people, I know I won’t be steering you wrong.”

“I was impressed not just with the speaker, but also with our students since they asked such relevant and intelligent questions,” says Professor Cooray.

Student attendees also appreciated Batsford’s insight. Joshua Goldstein ’21, Business Management major/MIS minor and President of the Business Students Association (BSA) who helped to organize the event, says, “It was fascinating to learn from an industry leader how digital marketing is changing with the implementation of machine learning and artificial intelligence. It was a real treat to hear Mr. Batsford speak on campus, an invaluable educational and networking experience for students to learn from such an esteemed business leader in the technology sphere.”