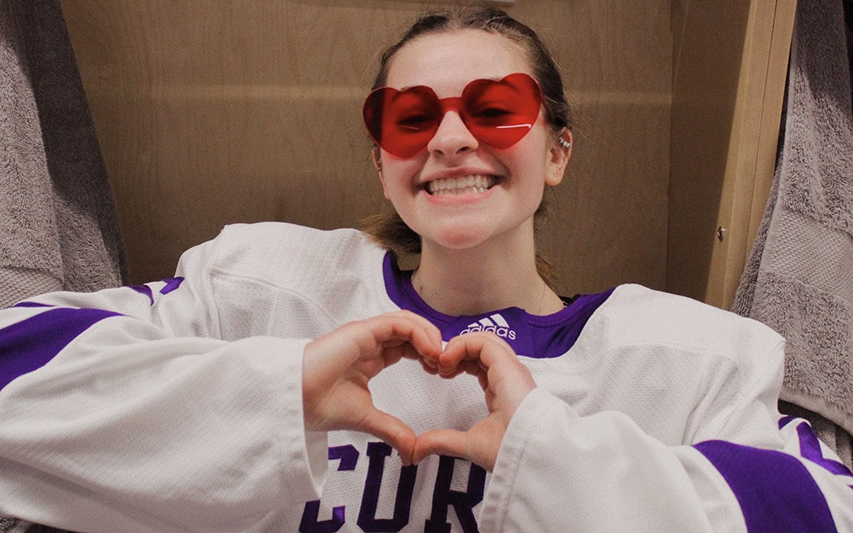 “I want anyone who is struggling to know they’re not alone. No one deserves to struggle in silence,” said Meagan Young ‘25, a two-sport student-athlete double-majoring in Biochemistry and Sociology, who is doing diligent and important work as a mental health advocate.

This summer, Young established the Curry College chapter of Morgan’s Message, a national platform dedicated to eliminating the stigma surrounding mental health within the student-athlete community, named after Morgan Rodgers, a former lacrosse player at Duke University who tragically took her own life in 2019.

“This past school year, my mental health hit an all-time low. Although I was succeeding in school, surrounded by my teammates and people who cared about me, I felt alone and that I would burden anyone I talked to,” said Young. “As athletes, we feel the expectation from society to handle things on our own, and that the negative emotions we feel are just ‘part of the game.’ I knew this had to change, and that is when I decided to become a Morgan’s Message ambassador.”

As an ambassador, Young created the Curry College x Morgan’s Message Instagram account, where she posts mental health resources and interactive videos surrounding the topic. On July 11th, the anniversary of Rodger’s passing, Young led Curry’s involvement with the #9for9 challenge, a campaign that encourages participants to get active physically or mentally in increments of nine, which was Rodger’s jersey number at Duke.

Young received overwhelming support from her teammates, peers, and coaches who participated in the challenge. “It was awesome to have so much support from both of my teams and peers. I’m so excited to get Curry more involved with Morgan’s Message.”

Young has an impressive list of goals and outcomes including charity games, fundraisers, and a co-ambassador program across all teams. “My goal for Morgan’s Message at Curry is to destigmatize mental health surrounding student-athletes (and all students) and the conversations around it. I hope that one day, people can openly talk about how they are feeling without walking around the subject. I aim to achieve this through fostering open conversation and having events on campus.” As an ambassador, Young will also take on the role of hosting education nights on campus about mental health, using resources provided by the Morgan’s Message Education Program.

Most importantly, Young aims to create a safe space for student-athletes, and for all students, to talk openly about their own mental health struggles. “Going to anyone that you trust is so much better than suffering in silence, because no one deserves to be fighting that battle alone. By talking openly about mental health, I hope to create that environment at Curry so students can face their struggles together.”