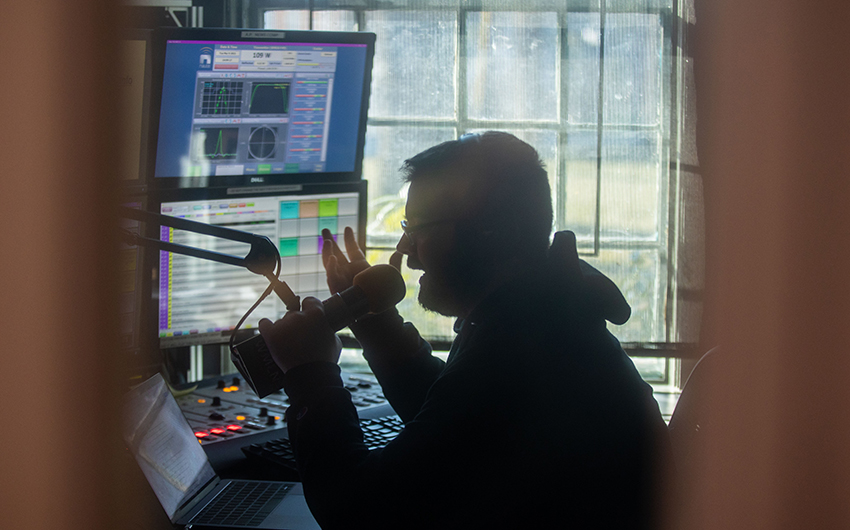 Among a pool of radio students across the country, Curry College senior Alex Fanikos took first place at the Intercollegiate Broadcasting System (IBS) 2020-2021 National Awards Conference in the Production category. Fanikos, a dedicated member of the College radio station WMLN-FM, earned the honor with his sweeper piece, titled “Left of the Dial.”

The winners were virtually announced at the 81st IBS Conference held this past weekend from March 2-6, 2021. Fanikos and fellow senior Dominic Manna ’21 were also recognized as finalists for their work in the category of “Best Show Promo” for the “Rock Bottom” Sports segment.

“My involvement with WMLN has shaped me a lot as a student,” says Fanikos. “I've learned to take on a lot of responsibility as the director of my own department while organizing myself professionally.”

The positive impact of WMLN runs strong in the Fanikos family, as sister Molly influenced Alex to get involved. “She was a director at the station during my first-year and told me how fun radio was, so took a leap and got involved.”

Fanikos and Manna represented Curry with pride, outperforming students from distinguished institutions such as Temple University, Rutgers University, and more.

“To be recognized nationally among hundreds of schools as a finalist and winner in the IBS college awards program is a true testament to the level of talent and skill of our radio students,” says Ken Carberry, assistant professor of Communication and interim director of WMLN-FM.

“Their work is just a small sample of the good work being done daily by WMLN-FM students.”

See the WMLN winners announced below at the virtual awards ceremony.