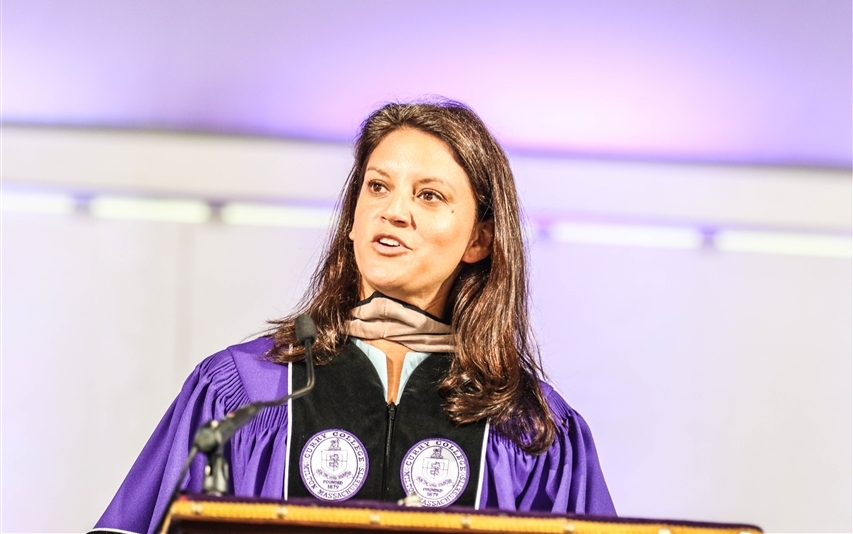 "True greatness comes from believing in yourself. Start believing today...imagine the possibilities."

Those were the words of encouragement that social entrepreneur Dr. Navyn Salem, Hon. '18 shared with the Curry College Class of 2018. Salem, who served as Commencement speaker, was also awarded an honorary Doctor of Business Administration degree.

"In 2007, you embarked on a mission of ending childhood malnutrition after visiting your father's homeland of Tanzania," said President Quigley. "It was there you witnessed firsthand the devastating effects of malnutrition, and first had the noble idea to get a new, high-quality "miracle" food into the hands of many more of the world's most malnourished children."

Salem is the founder and CEO of the nonprofit organization Edesia that manufactures specialized ready-to-use foods (RUFs) for malnourished children out of its state-of-the-art factory in North Kingstown, R.I.

Since 2010, Edesia has made enough lifesaving food to reach more than seven million children in 51 countries, among some of the planet's most vulnerable populations.

"To be able to travel the world delivering hope in some of the toughest places on earth is the greatest gift you can imagine. It's the chance to give life that energizes me every morning and fight on behalf of millions of powerless children without voices and on behalf of those mothers without a stage," remarked Dr. Salem.

Salem told the graduates they should welcome failure as it is a stepping-stone towards greatness.

"Because I learned not to be afraid of failing, there are little girls and boys all over the world who went from skin and bones to happy and healthy in a matter of weeks. I don't know all of their names and I can't see all of their faces but I feel them in my core and that is what keeps me going."