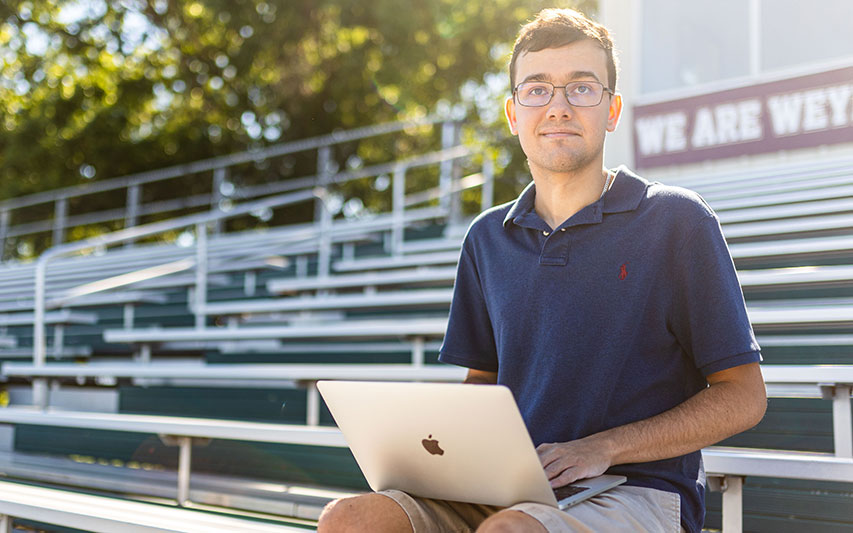 This spring, the New York Knicks clinched a playoff spot for the first time in nearly a decade and Jesse Cinquini '22 was among a team of sportswriters covering the historic event. The basketball enthusiast and communication major works as a features writer for The Knicks Wall and contributes to SB Nation's Grizzly Bear Blues, covering the Memphis Grizzlies and CelticsBlog, covering the Boston Celtics, among other news outlets.

The New York Knicks have won the NBA Finals only twice, in 1970 and 1973. They last made the playoffs in 2013 (and lost to the Indiana Pacers in the Eastern Conference Semifinals), making this spring a historic season.

"I loved covering every moment of it, and I'm humbled that a well-respected website such as The Knicks Wall allowed me to cover them," says Cinquini. "With a defense-first identity and an emphasis on ball movement on the other end, they were a joy to watch every time they took the floor."

In March, Cinquini also started writing for CelticsBlog, a news site he's read daily since he was a teenager. "Considering the Celtics are my favorite NBA team and CelticsBlog is a go-to source for many for Celtics coverage, contributing to the website is a dream come true."

"I enjoy researching stories and finding stats that surprise and intrigue me," he adds. "There's almost always at least one stat I find per article that changes my perspective or teaches me something I didn't know. I'm always trying to learn more about the sports and teams I cover and writing articles with a stats-heavy approach has allowed me to do just that."

Cinquini credits his communication and journalism courses for his writing chops, as well as his experience last fall at Curry as a reporter for The Currier Times. "Writing for the student-led news site gave me a glimpse of what it takes to be a reporter in the journalism industry. I learned how to work on tight deadlines and weave quotes into my stories."

“Jesse exemplifies our team-based and project-based learning in the communication major,” says Jerry Gibbs, professor and faculty advisor to The Currier Times. “His involvement with The Currier Times has really helped keep our student-produced newspaper up to date, and it’s great to see his journalistic endeavors with professional sites as well.”

This summer, as the NBA playoffs continue, followed by the draft and free agency period, Cinquini says they'll be no shortage of topics to write about. He plans to continue in his writing roles to fill his professional portfolio. Ultimately, after graduating from Curry, he hopes to work full-time as a sportswriter- a career aspiration that is already well underway.