At Curry College, Dr. Zachary Gross '11 Learned How to 'Shoot for the Stars' 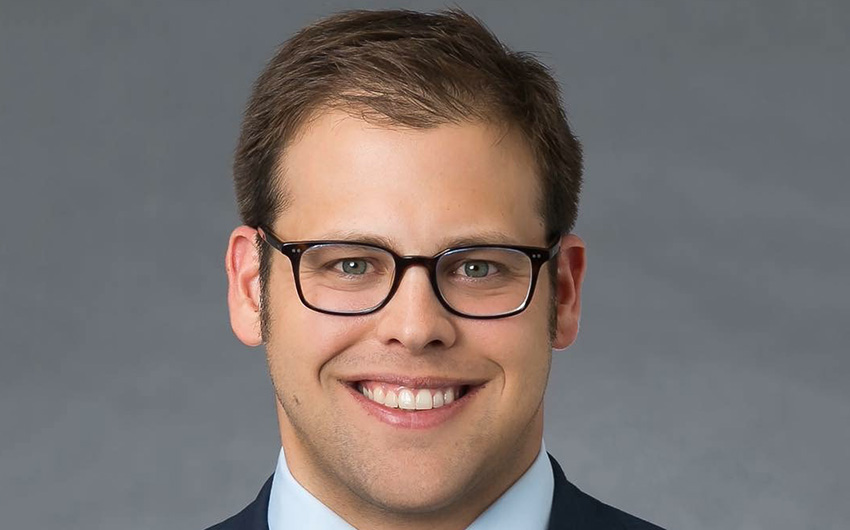 Dr. Zachary Gross started his dream role this summer as a geriatric and internal medicine physician at Cape Cod Healthcare and Perfect Health, Inc., a primary care practice that offers visits to seniors in their homes. Still, he says his path to realize his aspiration of becoming a practicing physician today wasn't a straight one;  he would describe it as a journey with a zig or zag along the way.

After high school, the Washington, D.C. native pursued his dream ice hockey career playing Junior A hockey in New York and New Hampshire. Ultimately, though, he decided to retire his career after suffering through multiple knee surgeries. He then began studying at the University of Arizona, where an "aha" moment during a nightly study session led him to Curry College.

"I was being tutored for a class that I was not very interested in. Afterward, I walked outside and looked up at the Santa Catalina Mountains and realized that I did not want to be there, and it was not the right school for me," he said. "I then called my parents and said, ‘I think it's time to transfer to a smaller school like Curry College.’ They jumped for joy and said, 'We knew that was the right place for you all along.’"

Following his interests in yoga, meditation, and eastern medicine, Dr. Gross began taking pre-med courses at Curry with a plan to pursue a career as a naturopathic doctor. "I started in an anatomy and physiology course with Professor Charles Towle, who pulled me aside and asked why I didn't want to apply for traditional medical school," he says. "I didn't feel that I was smart enough because my academic background was poor due to my focus on hockey for many years and that I was starting from scratch at Curry. He responded that it was nonsense, that I was his best student, and why not shoot for the stars? From there on, I never looked back."

With a major in Community Health and Wellness and a minor in Biology, Dr. Gross worked through seven courses each semester and graduated magna cum laude. He was accepted to Ross University School of Medicine. "The small classes and the opportunity to call my professors at 9 p.m. to ask a question were the things that set me up for success," he says. "With the small classes, you could not hide if you were struggling. It pushed me to be at my very best every single day. I knew that if I put in the time and effort that I could excel, and that's exactly what happened."

Before his start as a medical student, Dr. Gross worked as a research associate at the MedStar Washington Hospital Center. "I did a year of thyroid cancer research under one of the world leaders in Endocrinology before medical school, which helped me immensely." Following medical school, he spent a year at the Institute of Myeloma and Bone Cancer Research in West Hollywood, Calif., as a clinical research analyst and published various research papers on Multiple Myeloma. He then led his medical residency at Florida State University College of Medicine, which he completed in June.

What he enjoys the most about medicine is learning new complex topics, analyzing data, and coming up with a diagnosis and treatment plan. "I also get to talk to patients in their most vulnerable states. They tell me things they don't even tell their closest family members. It is truly a great profession to be a part of." The young doctor says the coronavirus outbreak this year has provided another opportunity for physicians to be humble in their practice. "The biggest challenge has been the unknown. There is so much we do not know about COVID-19, and right when we think we know something, we learn that we may have been wrong. Being counted on to take care of patients with a disease that is evolving so rapidly is very humbling."

As for what's next for Dr. Gross, he plans to pursue board certification in clinical lipidology but whole-heartedly believes his success in medicine today ties directly to his time at Curry College.

"Curry gave me that chance to be successful. I came from a non-traditional educational path, and they made it possible for me to succeed,” he says. "Professor Marie Turner and Professor Katherine Morrison were my mentors throughout, and without them, none of this would have been possible."