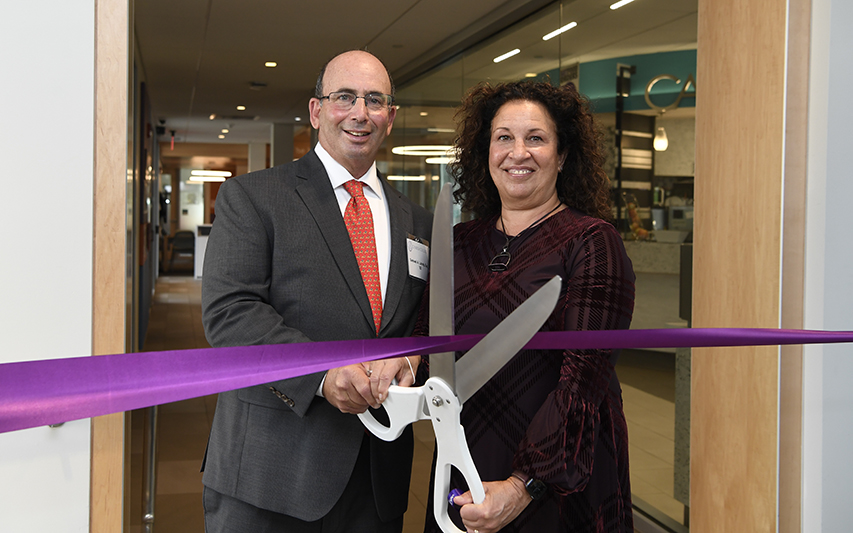 This article appears in the Fall 2021 Edition of Curry Magazine

Businessman and horse farm owner Sam Landy ’82 is grateful for the education he got at Curry and that he gets to share all aspects of his life with family.

It took only a semester for Landy to adjust to college-level work, and he became a consistent member of the Alexander Graham Bell Honor Society for the remainder of his career at Curry, where he majored in business.

Nearly 40 years removed from his undergraduate experience, Landy has proven himself to be more than a quick study during a successful career as a property developer and also as a leader in the horse industry and in his community.

After receiving his B.A., Landy earned his J.D. from Widener University School of Law before joining his father, Eugene, in the family business, UMH Properties, based in Freehold, New Jersey. As president and CEO of the company for more than two decades, Landy directs management, acquisition, construction, and development of manufactured home communities. Since 2009, UMH has grown from 28 communities and 6,800 home sites to 127 communities consisting of more than 24,000 home sites.

In addition to the admiration and respect Landy has for his father, he also remains grateful for the education he received at Curry, where others believed in him and he learned to trust his own abilities. He is the longtime host of Curry’s New York City Reception, facilitating meetings between alumni and prospective families, and sits on the Curry Council as an adviser to President Kenneth K. Quigley, Jr.

For many years, Sam and his family have been generous donors to the College’s annual fund. Their most recent gift to the College is the Landy Family Student Services Area, a campus hub that houses the study abroad program, writing center, presentation center, and more. It’s a place Vice President of Institutional Advancement and Alumni/Family Engagement Sally Murray says will “help students succeed in a one-stop-shop location.”

Sam Landy explains that the gift was inspired by the memory of his mother, Gloria, who died in 2020. Though she never attended college, Gloria Landy was a woman who greatly valued education. She was a published poet, head of the New Jersey Poetry Society, and worked at United Synagogue, United Jewish Appeal, and the United Nations.

“She was an incredible influence,” Landy says, “and very much would want us to support Curry College.”

When Landy talks about his life, he says he’s fortunate to have the best of both worlds. He and his wife, Laurie, raised sons Jeremy, Harry, and Daniel on the 200-acre Congress Hill Farm in Monroe Township, New Jersey, where they train horses and operate Special Strides, a nonprofit that facilitates healing for more than 130 disabled children each week through therapeutic riding and occupational therapy.

Since 1995, Congress Hill also has been home to Chabad Camps, which host about 300 children each summer for swimming, playing in the woods, and learning about the animals that inhabit the property. Sam and Laurie also founded The Open Space Pace, which, in addition to lobbying for the preservation of open spaces in New Jersey, helped revive the state’s horseracing industry. For that work, Landy was named New Jersey Horse Person of the Year in 2014.

When Landy first arrived at Curry, his greatest desire was to run a farm, where he could work with horses full-time. He attended law school near Brandywine Raceway, near Wilmington, Delaware, beginning each morning by training and riding standardbred racehorses, before heading to class.

For many years, Sam and Laurie delivered foals, fed and cared for the animals at Congress Hill, and took care of all the other chores themselves. These days, their son Harry joins Laurie in managing the farm and training the horses. Sam still gets up with the sun each morning to make his rounds on the property before heading to the office to work with his father, sons Jeremy and Daniel, and a staff of 400 employees at UMH.

“The most satisfying thing is I get to work with my father and my sons,” Landy says. “[My father] is always thinking about how we grow, how we provide more affordable housing, how we change government programs to reduce residents’ cost of financing, and how we change government programs so more affordable housing can be built. It’s amazing to watch him be optimistic, hardworking, and thinking about the future.”

Speaking of the future, Landy is impressed with the direction in which Curry is headed under the leadership of President Quigley. It is one of the primary reasons he enjoys serving on the Curry Council, thinking about institutional priorities, and using his own experience and education to shape –and support– future plans.

“Everything I’ve seen about the growth of the school through President Quigley gives me incredible confidence to support Curry College,” Landy says. “I see Curry as an important institution because it gives a chance to people who may not have had an outstanding academic background in their adolescent years to learn after they’re more mature. It’s a great opportunity that many people need — and you can’t get that everywhere.”