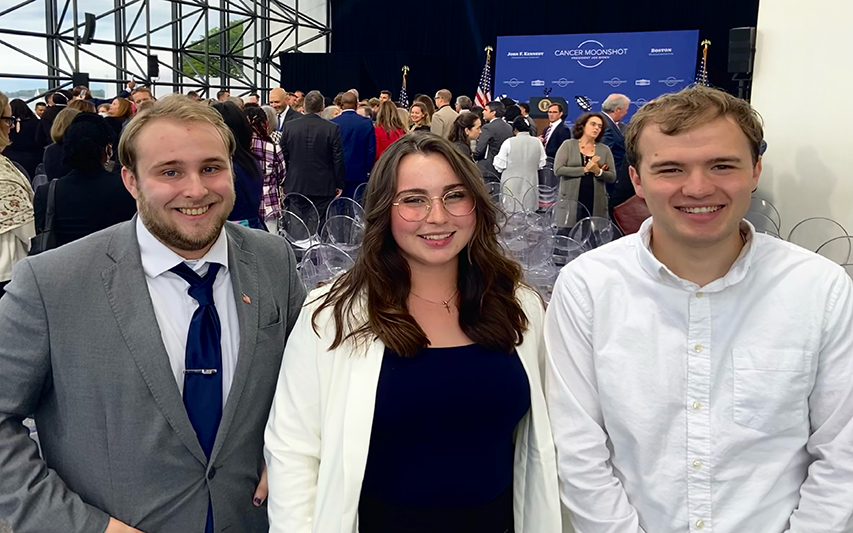 Upon arrival to the JFK Library in Boston, Perron, Ouellette, and Wilder were granted press passes after security check-ins. “The feeling was surreal,” said Wilder, who is concentrating in Television and Digital Video. “It felt extremely validating to be part of the limited press for the event, while being in the same room as the President.” 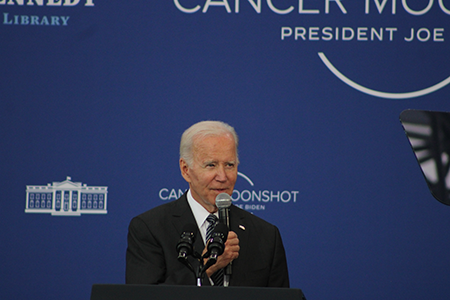 During the speech, the three students took notes and photos, and will craft a news story for The Currier Times, Curry College's student-produced digital news publication.

For Ouellette, covering the historic event is yet another example of how the Curry College experience has shaped him both personally and professionally. “This opportunity allowed me to experience first-hand what it’s like to cover large events as members of the press,” said the Communication major with a concentration in Radio and Television. “But it’s the classes I’ve taken at Curry, along with the internships I’ve done that have helped me get to this point in my life.”

“We are proud to be on the media list for the White House, continuing a tradition of Presidential coverage that started during the Obama administration,” said Jerry Gibbs, professor and Director of Television and Digital Video. As one of the College’s largest and most diverse programs, the communication program provides a solid foundation in theory and analysis combined with hands-on courses where students learn the craft of their chosen concentration.  “These real-world experiences greatly enhance what students learn in the classroom and prepare them at a high level for their career fields.”

And while all three students have different paths of study within the Communication program, all can attest that the concentrated curriculum has provided them with valuable skills and real-world experience needed to achieve their future goals. Perron is taking full advantage of the diverse programming as a double major in Communication and Public Relations with a concentration in Journalism and a minor in Marketing.  “My experiences thus far at Curry have shown me just how far I can go with my skills,” she said. “This experience has helped me reach for greater things that I originally thought wouldn’t be possible. It has shown me how much I’m capable of and what more I can do in this industry.”