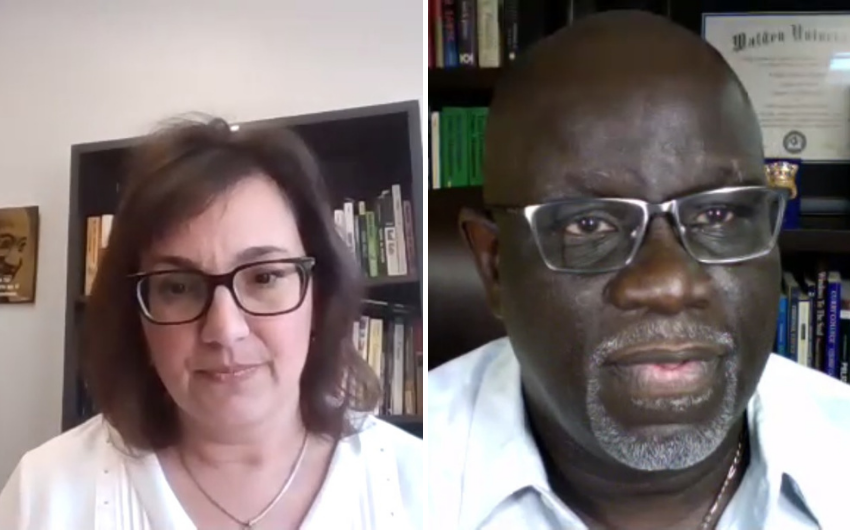 As the trial of Derek Chauvin, the former Minneapolis police officer accused of murdering George Floyd last May, progressed in Minnesota this spring, the entire country waited with a mixture of anticipation, fear and hope for the outcome. On April 20, Chauvin was found guilty of murder and manslaughter and convicted by the jury.

On April 23, Curry students, faculty and staff gathered on Zoom for a conversation about the trial and an exploration of “Where do we go from here?” The panel discussion featured Curry Criminal Justice department faculty members Willie Bradley and Jennifer Balboni, Liz Peinado, senior director of talent for Saga Education. It was moderated by Jeannette Buntin, assistant vice president of student engagement and diversity.

“It’s important for campus communities like ours to gather when issues related to race, crime, or justice rise and we look forward to coming together more to discuss these current events to create spaces that provide platforms for people to share their thoughts and hear their voices and to support those that are impacted,” says Buntin.

The panelists related their personal experiences of following the trial and the verdict and discussed topics including the need for police training that emphasizes de-escalation instead of aggressive response to threats and the need for community involvement with police forces to effect change. Questions of accountability in the context of police culture and the impossibility of true justice for victims like George Floyd were explored.

Professor Bradley spoke from the experience of his long and distinguished career with the Boston Police Department. “From a law enforcement perspective, as a police department, we have a golden opportunity here to reimagine policing in America,” he said at the event. “We have a golden opportunity to put the pieces in place that could bring back humanity in law enforcement. We need to get out of the cruiser; we need to get out in the community. It’s time for policing to reimagine how it would do its job. And we must include the community in that process. It’s important for law enforcement administrators and leaders to understand - to solve a problem, and we need to acknowledge that we have a problem in the first place. And that’s what we haven’t done.”

Professor Balboni also emphasized the importance of looking back at the recent history of policing, including shining a light on racism and racist structures and incidents, to affect future change: “If you want to move forward, you have got to reconcile with the past.” She and Professor Bradley agreed that this is a vital component for police departments and the communities they serve to understand themselves and each other better and move forward together with greater trust.

Buntin asked what young people can take away from this trial and verdict, and Peinado encouraged them to examine what their locus of control is today and what they want it to be in the future and set up plans to get there. “Challenge yourself to think about what impact you want to make and how you want to get involved in the fight for equity across America. Does that look like becoming a lawyer to be the type of lawyer you want to see? Or perhaps becoming a business person and establishing practices for equity. It will require some self-reflection but keep pushing forward because we have to and because we deserve it.”

The panelists agreed that significant jail time is likely for Chauvin, although he has yet to be sentenced, and they all emphasized the need for sustained activism and change for the future.

“Where do we go from here? The Chauvin case is a win, but it’s a small win. When we think about the activism that has happened in the last year, it wasn’t just in Minneapolis, but in Boston and Washington, D.C., and London and Australia. We can realize the power and influence of real change and activism when it’s put to work.”

See the full discussion in the video recording below.