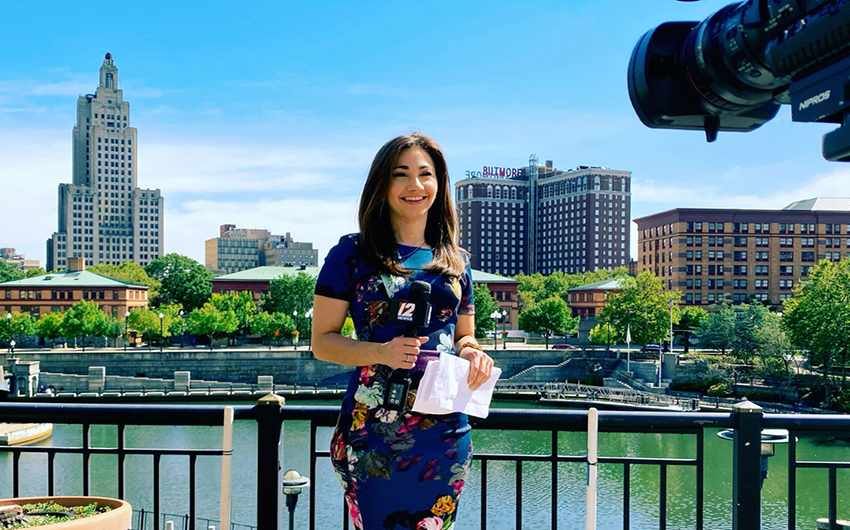 This month marks one year since Gina Marini ’11 joined WPRI 12 in Providence as Anchor and Consumer Reporter.

“I began this job right as the pandemic shut everything down,” she says. She credits the challenges of the past year for helping her learn to work with the tools available. “One of the challenges COVID presents is limiting the ability to connect with people from the community, but with current technology, I’m still able to compose an interview and tell someone’s story. COVID also creates a lot of quick change - so I’ve learned how to adapt.”

Before joining the WPRI 12 news team, Marini was a morning anchor and reporter for FoxBangor in Bangor, Maine. During her time there, Gina received first place for her series “Children of the Opioid Crisis – the Untold Story” from the Maine Association of Broadcasters.

“As a consumer reporter I love how I can dive deep and find answers to help someone; it’s extremely rewarding to be able to make a positive impact in someone’s life, while holding others accountable. As an anchor, I like connecting with the viewer and making sure they have coverage they can count on.”

The former communication major credits the College for her success gaining real-work experience through an internship opportunity at a local public-access station. “This allowed me to understand what life is like as a multimedia journalist, before stepping into the industry. Curry also provided a course called Experiential Learning that taught me proper interview etiquette as well as ways to stand out when being considered for a job opportunity.”

For current communication student, Marini says internships and a willingness to relocate will be critical to early success in the field. “An internship experience allows you to see how an industry works and I would recommend having several internships under your belt before graduation,” she says. “With each experience, you’re able to see how a sector within that industry works and it will let you figure out which area you’d like to pursue.”

Marini began her career in Groton, Massachusetts, working as a reporter for The Groton Channel. It was in this small town where she found her passion for journalism through telling stories that mattered to the community. In 2015, she joined the NH1 News team working behind the scenes, and eventually becoming a reporter. During her time at NH1, Marini had the opportunity to cover the 2016 presidential race where she reported on several town halls and interviewed many of the candidates.

“It’s a hard pill to swallow but know that your first journalism job most likely won’t be close to home. You’re going to have to be willing to move a long distance for your first and sometimes second job. I got lucky; I was able to stay in New England, but I know plenty of other reporters who’ve had to move across the country. Don’t be afraid of this, instead see it as an adventure and embrace the opportunity.”