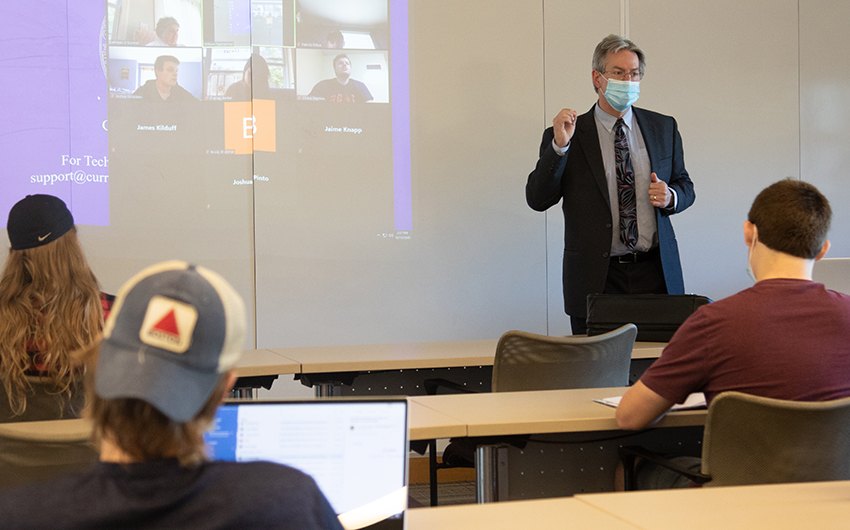 Step into Bell Hall 305 on any Tuesday or Thursday afternoon in the next three weeks, and you'll find teams of political analysts examining the hundreds of factors that will influence the outcome of the presidential race this fall.

In the Electing the President course – which is team-taught by Politics and History Chair and Professor Dr. Bill Nancarrow and Professor Emerita Kathy O'Donnell – students work in small groups to research and analyze historical knowledge and up-to-the-minute press coverage on everything from the economy to voting behavior. By the end of the month, their detailed analysis will inform their prediction for which candidate will take the pivotal "battleground" states, including Texas, Arizona, Pennsylvania, and North Carolina, among others.

"We've run this class every four-years beginning in 2012 and including the 2018 mid-term elections," says Dr. Nancarrow. "The goal of the class is to analyze the presidential election in real-time. By looking critically at the media, state demographics, voting history, and so much more, the students do what political analysts do. They become pundits or expert analysts on their state."

Winning in these battleground states will be the key to 2020 election victory. "Texas is a critical state in the election. Behind California, they have the second most electoral votes," says Mike August '23. "California is a reliably Democratic state, and if Biden could win both California and Texas, that would provide him a huge advantage." The Republican candidate has won Texas every election since 1980. Still, August says a few pockets, including populated urban areas such as Houston, Dallas, and San Antonio, can significantly influence whether the state is red or blue on election night. "African-American women in Texas have traditionally not gone out to vote in large enough numbers to flip the state, but if they do, they have the most potential to influence and change the outcome of this election in Texas."

In Pennsylvania, voters turned up for the Democratic ticket in 2012 but then voted Republican in 2016, say William Day '23 and Josh Goldstein '21. "There are more registered Democratic voters than Republican and Independent voters combined in the state. However, there have been recent reports in multiple news outlets that show these Democrats are voting for more conservative and independent candidates," says Day from his analysis. Goldstein also says the female vote is the one to watch in the state. "During the election, there has been a lot of focus on suburban women voters. Women in Pennsylvania favor Biden, but it's an important group that will be critical to both candidates."

From their research on North Carolina, Emily Rosalbo '23 and Sierra Fiore '24 argue that current events, including President Trump's coronavirus infection and the outcome of the Supreme Court Justice nomination on the Affordable Care Act, could influence undecided voters in the state. "The polls on issues such as race, SCOTUS, or healthcare are more telling than the general polling," says Fiore. "Protecting insurance for people with preexisting health conditions is one of the healthcare issues that can sway undecided voters in North Carolina. We're watching what promises each candidate is making on that and other prominent healthcare topics that we know people in the state care about right now."

For Dr. Nancarrow, a critical element of the course is to demonstrate proper civil discourse for students at a time when politics have become more and more polarized. "Professor O'Donnell and I come at the world with different perspectives; I'm a historian, and she's a political scientist. They must see two grown-ups who disagree politically have appreciation and respect for one another. Even with opposing philosophies, we are great friends and work well together to teach the class," he says. "We want to create a space in the class where students from different perspectives can engage in that same type of inquisitive, thoughtful, and respectful discussion. All of us in the Politics and History department are committed to that vision, and model it for our students at every opportunity."

Students will virtually assemble on Tues., Nov. 3, to continue their real-time analysis and report live Election Night coverage with Curry’s radio station, WMLN. Presidential campaign enthusiasts can also see the students' battleground state analysis in action this weekend at Curry's Virtual Homecoming and Family Weekend. On Saturday, the event will feature a pre-recorded video snapshot of their work this semester, including a live Q&A with students and Dr. Nancarrow immediately following the video.