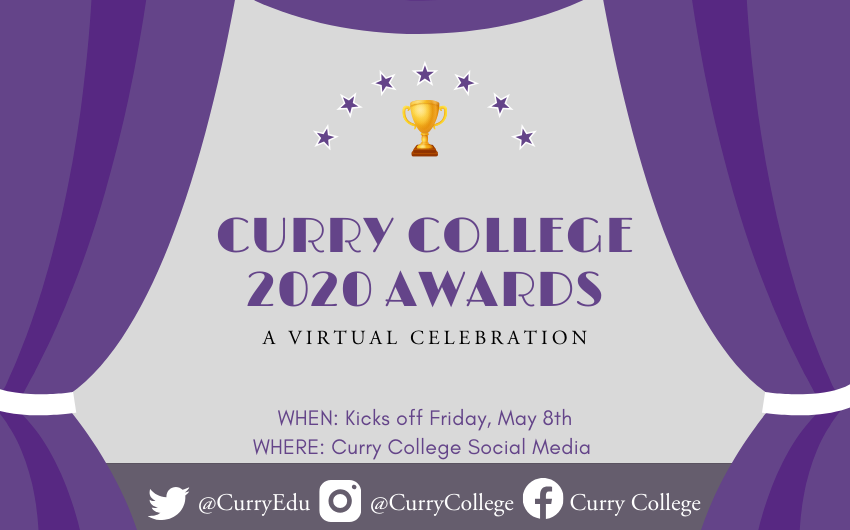 This year, the 51st Annual Curry College Awards Recognition Ceremony was held as a two-week social media campaign to honor the amazing accomplishments of the 2019-20 academic year. The annual awards recognized students for contributions to the College, including notable achievements in academics, athletics, arts, service, and social justice. In the multimedia series #CurryCollege2020awards, award winners were described as a “pinnacle of academic excellence,” and praised for “always going beyond the assignment.”

More than anything, the award winners represent how collectively the campus community comes together as learners, leaders, and mentors in support, encouragement, and positivity, even during an unprecedented global health crisis.

With the Unsung Hero Award, Curry Theatre recognized Ryan Gamble ’20 for his success leading as production manager and for continuously contributing to the program’s continued growth and positive atmosphere. The Early Childhood Center honored Rebecca Brodette ’20 and Brianna Rivers ’20 for its CECC Outstanding Student Award. Rivers worked at the Center for four years and most recently led its transition to Kindergarten program. Dance Award Winner Alexandria Taylor ’20 “shared culture through dance” and led summer dance workshops for youth in Trinidad, among many other achievements. Marguerite A. Major Distinguished Service Award winner Yamilhee Saint-Val ’21 went “above and beyond” to train and mentor other resident assistants, lead campus tours, and serve as a teaching assistant in the First Year Transitions course, to name only a few of her campus roles.

Named Outstanding Film Student of the Year, Paige McGhee ’20 took up an independent study course to write, direct, and film a short film. Though she returned early from her spring internship in Los Angeles at the American Film Institute, McGhee continued to produce an animated short film at home during the end of the semester. “Over the past three years, Paige has developed both technically and as a storyteller with a unique point of view,” says Padrick Ritch, assistant professor, film production. “She has an extremely bright future ahead of her.”

For McGhee and thousands of other college students across the country, spring internships were cut short this semester. However, it was quite the opposite for Intern of the Year Faith Cahill ’21. She continued to work through the pandemic at the Larson Senior Center in Attleboro, Mass., to conduct community outreach and help seniors get food, medications, and other support while isolated at home.

“She helped organize and distribute food donated by the New England Patriots. According to her supervisor, Faith never hesitated to help others amid the crisis. In my opinion, she is a caring and compassionate young woman and represents the best of Curry College,” says Beth Carey, associate professor, psychology.

So much campus community-building and connection takes place at the center of campus – the “Stu” or Student Center. It’s no surprise then, that the Curry College Person of the Year is also housed there and has had a monumental impact on creating a “home away from home” for students. Curry’s Director of the Student Center & Service Scott Daube was honored with the award this year, which is given to a faculty or staff member who has made a significant impact on the lives of students and the Curry community as a whole. Student Body President Cotdell Tunning ’20 described Daube in the announcement of the award as a natural leader, mentor, and someone that is known to push people to grow and be the best versions of themselves.

“Scott is very deserving of this honor,” says Jeannette Buntin, assistant vice president of engagement and diversity. “This award celebrates Scott’s involvement in the life of the college as well as the vision and leadership he has brought to developing amazing leadership and service opportunities for our students.”

Curry Magazine: Navigating the Pandemic - Safe, Healthy and Together

From Pupil to Pro: Students Work as Interns During Winter Break