50 Years of Changing Lives, One Learner at a Time 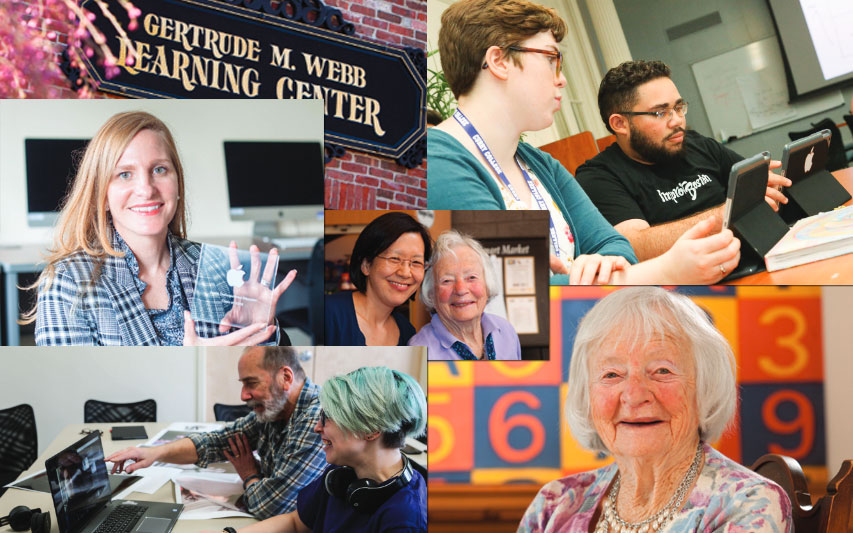 This article appears in the Fall 2020 Edition of Curry Magazine

The student wasn’t taking "no" for an answer.

She was a first-year Curry College student in her first weeks of the Program for Advancement of Learning (PAL). "I told her the results from her neuropsychological testing were back and that we’d review them the next time we met," recounts PAL Director and Professor Dr. Laura Vanderberg. Nervous, the student couldn’t wait. Based on her past academic performance, she assumed her intelligence was sub-par. "I looked at her scores and said, 'That’s not the case at all. In fact, you fall into the gifted and talented range in some areas,'" Vanderberg explained. How could that be, the student asked, since she had always struggled in school? Vanderberg replied, "You’re a world class ballerina who’s always only been given a one-foot square box to dance in."

The poignant story is one that has been repeated thousands of times in PAL, the pioneering program that marked its 50th anniversary in fall 2020. The first of its kind in the country, PAL provides academically focused assistance to bright, college-able students with specific language-based learning differences, executive function challenges and/or AD/HD. Using a strengths-based approach, PAL emphasizes "metacognition," or teaching students how they learn. With that understanding—and support from PAL faculty—students devise new strategies for acquiring information and communicating their thoughts and ideas.

At the start, it can feel a bit like Humpty Dumpty. "Oftentimes, students come in fractured and fragmented. They’re not whole," Vanderberg says. Through years of Individualized Education Plans (IEPs), students have absorbed the message that there is something wrong with them. PAL flips that deficit model on its head, educating students about their abilities and coaching them in how they can use those skills to succeed. "Through PAL, we see students start to bring together who they are as thinkers and learners. We get to see them step into who they were always meant to be," says Vanderberg.

Before ‘learning disabilities’ was a widely used term, before neuropsychological testing, before the Americans with Disabilities Act (ADA), there was PAL. How did this leading-edge program come to be—and why at Curry College? Former PAL Director Lisa Ijiri has a simple explanation: "The incredible vision of Gertrude Webb." A native Bostonian and lifelong educator, the late Dr. Gertrude Webb had been appointed to a Lectureship in Education at Curry in 1969. In a 2011 issue of Curry Magazine, Webb explained to how she came to take an interest in students who struggled academically.

In 1937, she was teaching high school English. "I had a very bright boy in my class named Bill. I was teaching...The Merchant of Venice. Bill seemed to understand the abstract ideas that the characters were expressing. Nobody else seemed to understand that, so I thought Bill was a genius, until I got his paper from the first test. There wasn’t a period, there wasn’t a capital [letter], and there wasn’t a sentence. Everyone else had given up on Bill, but I didn’t. He started coming to see me after school, and so began my work with students with dyslexia."

That interest led to the launch of PAL in 1970 and a methodical reframing in thinking about students with learning differences. For a long time, "there was an implication of malintent," Vanderberg notes. "They were seen as lazy or bad for not wanting to try. Gert understood that there was a fundamental difference in the way they were processing information." With PAL, Curry was "providing accommodations and teaching before the country as a whole was accepting students with learning disabilities in higher education. It was amazing."

Today, PAL is still the only program of its kind in the country. "At other colleges, there’s typically a disability resources office, staffed by one person. It’s there because it’s required," she continues. At Curry, PAL is a full academic department with 28 faculty members who share a passion for coaching students with learning differences. Those faculty work with approximately 330 students—20% of the student body—either one-on-one or in small groups, helping them become competent, effective, independent learners.

Being first meant Curry was regularly sought as a model. "I would go to conferences and people would come up to me and say, 'My institution wanted to start a program like PAL, so I came and met with Gert...'" Ijiri explains. Thanks to Webb’s leadership and foresight, Curry became a trendsetter, pushing higher education from benign neglect to acknowledging students with learning differences existed to creating a path so they could succeed in college.

Fifty years of alumni have been transformed by PAL. "When I got to Curry, PAL was someplace I could feel comfortable," recalls Scott Samson ’91. "The faculty were incredibly helpful, and I was able to meet students who were similar to me." For Samson and thousands of others, that introduction started in the Summer PAL Bridge Course for incoming first-year students.

"The summer program was a huge help," remembers Heather Callanan ’87. "I met dozens of people who were in the exact same boat as I was. It gave me confidence. And when I arrived in September, I already had friends." Callanan credits PAL for teaching her specific strategies in areas she found challenging. Faculty members like Marie Murphy “helped me organize my thoughts and develop good communication skills. I had a lot of difficulty in taking notes, so I would tape record classes and listen to them over and over." Thanks to PAL, Callanan became a nurse. "If I didn’t have PAL, I wouldn’t be a nurse—or it would have taken me eight years instead of four," she concludes.

Alfredo Maldonado ’01 calls PAL "life changing." A native of Puerto Rico, Maldonado was grappling with learning differences and communicating in a second language. Through PAL, he tried different approaches, crossing off the ones that didn’t work. Audio books, for example, were a disaster. Through trial and error, he eventually landed on a three-pronged approach: getting a professor’s PowerPoint slides, reviewing them beforehand and then listening to the professor lecture with the slides. "Curry helped me believe in myself," Maldonado says. "I became an RA and an admissions tour guide. I got involved with the international club and the business/investment club."

Leadership was also a PAL byproduct for Samson. Once he wasn’t struggling with academics, "I was able to get involved," he recalls. "I was an RA, co-chair of the Alcohol Beverage Commission, played tennis and intramural sports. I learned a lot of leadership skills as well as time management: I found I’m much more efficient when I have a lot on my plate."

In talking with alumni, leadership and time management merely scratch the surface of PAL takeaways. "Work hard, work through it," Samson recounts. "If you don’t give up, you’ll be rewarded." He notes that this work ethic has helped him in his career: he now runs his own pharmaceutical company.

"Ask for help," adds Karina Murcia ’20, summing up the moral of her PAL story. "People think it’s a weakness but it’s not. It’s quite the opposite: You’re letting people know you’re interested, you’re motivated and you want to know more." Murcia is currently enrolled in a master’s program in Applied Behavioral Analysis back home in Los Angeles; her goal is to work with kids with autism, helping them assimilate into society.

"I present quite a lot. How I organize my presentations was all taught to me by PAL," says Maldonado. Because of PAL, "I am always cognizant of other people’s style of learning." This has proven useful in his job as an executive director at UBS Private Bank in New York. "It helps me as a manager to be in sync and have empathy," he says.

George Iverson ’85 rediscovered himself as a learner after three unproductive years at North Carolina State University. "This was in the early ’80s before they knew about learning disabilities, accommodations or dyslexia. I was pretty beaten down," he says. Thanks to PAL, "I learned the value of being prepared, being focused and being realistic about how long things took. I also learned how to use structure. Because of PAL, I was able to get a college degree and move on in my career." For Iverson, that entailed nearly 25 years with IBM. Curry and PAL, in fact, have been instrumental for two generations of his family: Iverson explains that his daughter, Katie, took a year off from Dickinson College and enrolled at PAL where he says she gained "organizational skills and the ability to advocate for herself."

PAL began as an innovator; over 50 years, it has never stopped innovating for college students with learning differences. The latest installment is iPAL, which employs Apple iPads as a shared platform for PAL’s assistive technology curriculum. Eschewing higher education’s traditional top-down model, "students become co-owners of the curriculum, evaluation and pedagogy," Vanderberg explains. "They become self-sufficient."

Through iPAL, Vanderberg reports that faculty have seen significant student growth in skills such as life-long learning, technological fluency, and the ability to shift and maneuver technical issues. Additionally, students using the program are showing and reporting improvements in cognition, quantity of learning, motivation and self-regulation, as well as overall information retention. Online, the ATCenterPAL YouTube Channel includes student-created content of this learning in action and serves as a teaching and reference platform for students and faculty at Curry and across the globe.

For her work with iPAL, Apple selected Vanderberg for an Apple Distinguished Educator (ADE) Award in 2019. Established 25 years ago, ADE now includes a worldwide community of more than 2,800 educational visionaries. "As a member of the ADE network, Curry contributes to educational innovation across the world and brings ADE’s vast resources to the Curry community," Vanderberg adds.

Ijiri, who left Curry in 2013, is excited to see PAL’s broadening reach. Now an associate provost at Lesley University, Ijiri reflects on her time at Curry as particularly satisfying. "The most rewarding part was sitting alongside students on their path of growth and self-discovery, helping them be empowered with how they learn," she says.

Interestingly, Ijiri started at PAL in 1993, in time for the program’s 25th anniversary in 1995. She recalls being at the Massachusetts State House for what was declared "Curry College Day” and hearing alumni talk about the program’s impact on them. "I’ll never forget it," Ijiri remembers. "One speaker said that PAL didn’t change his life. PAL saved his life." Now celebrating 50 years, Curry and PAL can take pride in the success of thousands of individual graduates as well as changing the landscape of higher education for all those with learning differences.