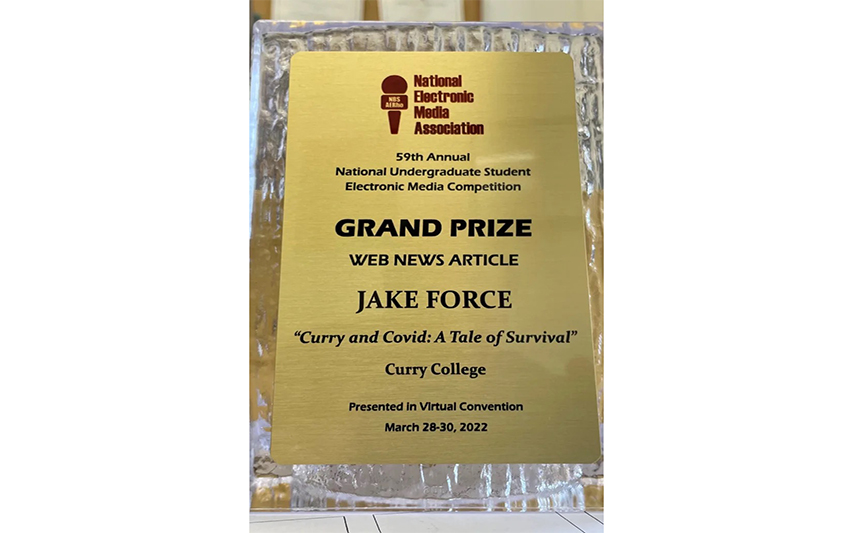 Last week, communication graduate Jake Force ’21 was recognized for writing the best web news article in the country by the National Electronic Media Association (NEMA/NBS-AERho) at its 80th Annual Convention. His three-part series titled “Curry and Covid: A Tale of Survival” outshined all submissions in the Web News Article category from institutions across the country.

Force joins the ranks of countless Curry College communication students and alumni who have been honored as finalists and winners at the annual conference. This nationally recognized victory is the second in two years for the College, and fifth win overall. Curry students have competed and placed in the national competition for more than a decade, facing other major colleges and universities including Emerson College, the University of Miami, and the University of Oklahoma.

“We are thrilled that Jake’s comprehensive, well-researched, and quoted article was found to be the best in the country by this college awards show,” said Jerry Gibbs, Director of Television/Digital Video and communication department co-chair at the College.

Additionally, in the Short Film category, Matthew Scipione ’21 received an Honorable Mention with his submission of, “King of the Imaginations.” His film, recognized as one of the three best short films in the country, has been accepted into the Boston International Film Festival and will be screened on Saturday, April 30th in Somerville.

MBA Students “Nailed It” With Recruitment Strategies for eClinical Solutions