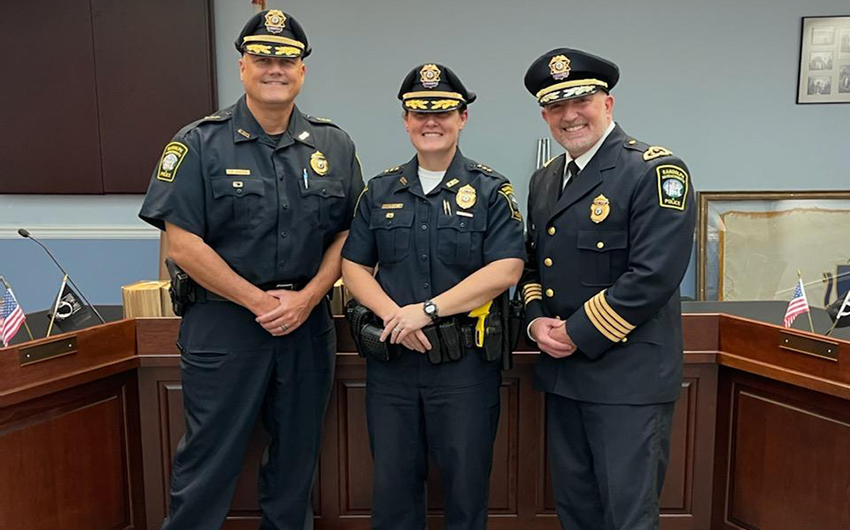 Earlier this month, Master of Arts in Criminal Justice (MACJ) alumna Melissa Greener ’07 made history in the Randolph Police Department. On July 19, she was sworn in as the first female commander in the department’s history by Chief Anthony Marag ’92.

“Being the first female commander is special. It's a great honor and responsibility that I take very seriously in not only being a great role model to female officers but to all officers,” said Greener. “It means the Chief believes in my leadership and commitment to the department and community.”

No stranger to success, this is Greener’s third time making history within the department, as she was also the first female sergeant and the first female lieutenant. She joins Brenda Perez MACJ ’04 as a standout female leader in the criminal justice field, as Perez was sworn in as the Brockton Police Department’s first female police lieutenant last July.

“Commander Greener has a distinguished career and is a proven leader who is forward-thinking and determined,” Chief Marag said. Marag, also a Curry College alum, was appointed to his new role as Chief in March of last year.

Greener began her career as a patrol officer for the Randolph Police Department after graduating from the Weymouth Policy Academy in 2005, and worked her way up to detective in 2007, sergeant in 2012, and lieutenant in 2014.

In 2007, Greener received her Master of Arts in Criminal Justice from Curry, and credits the concentrated coursework for her success. “Curry was close to home and my job, so it worked out well with taking evening classes. I took several courses that helped with my career.” An influential class that Greener took was grant writing, which provided her with skills and knowledge she carries into her professional role as the department’s grant writer, accreditation manager, and supervisor of courts, among many other responsibilities.

Greener looks forward to making a difference in her community, and will oversee police reform efforts, body-worn cameras, and the department’s new mental health clinician. “I'm grateful for the opportunity to show my skills in moving the department forward,” she says.

Her advice to Curry College students studying criminal justice? “Learn as much as possible - not only in school but in life itself. Law enforcement today is like an arm of social work, mediation, counseling, and family services. The best officers have the most well-rounded view of the world to help in often dynamic and evolving situations.”

School of Nursing Students and the Veterans Association: Careers, Connections, and Support

Everyone is Welcome Here: The New Curry College Diversity Center

Due to the winter storm, all Curry College weekend classes will be held fully online beginning Saturday, January 29.