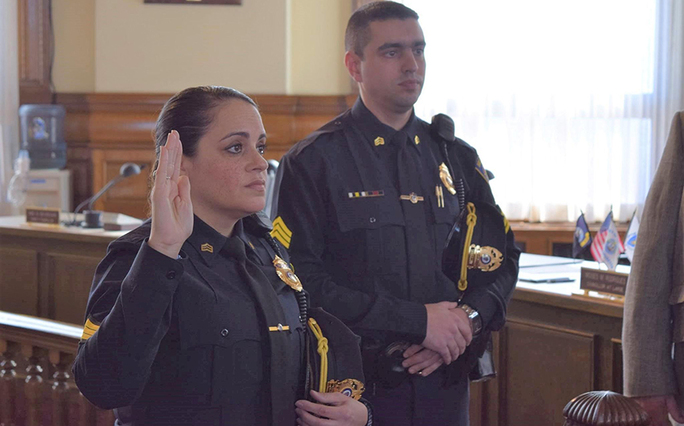 Earlier this month, MACJ alumna Brenda Perez ’04 made history in the Brockton Police Department. She was officially sworn in as the first female police lieutenant by Mayor Robert Sullivan and Police Chief Manny Gomes in a ceremony on July 7.

“It’s a historic moment,” Gomes said. “I’m very proud of the fact that she will be the first female lieutenant on the Brockton Police Department,” he said at the event which was featured in The Brockton Enterprise.

Born and raised in Brockton, Perez worked as a patrol officer for roughly 16 years until she was promoted to the rank of sergeant in 2016, as only the second female sergeant in the history of the department. Before joining the Police Department, Perez was in the U.S. Army Reserves, serving 24 years in the military, reaching the rank of master sergeant.

Perez says the achievement is significant because she hopes it will resonate with other women and minorities. “I recognize the significance of the moment, not only the moment as a woman but as a first-generation minority.”

After serving on the Brockton police force for four years, Perez began studying as a graduate student in the College’s Master of Arts in Criminal Justice (MACJ) program to reach a new level of excellence in her policing career. “I knew people who were attending Curry and believed that it was a school that challenged their students. I feel that I have learned more at Curry than I have learned at any other college I have attended,” she says. “My Curry College degree has enhanced my career. I believe I can better communicate with citizens, co-workers, and supervisors.”

Perez is only one of many MACJ alums that are now working as law enforcement leaders in their communities, including Jen Pompeo ’08 in Weymouth and Steven Sargent ’04 as the Police Chief in Worcester. By mixing theory with practice, the program allows graduates to advance reflective thinking capabilities and become more adept at problem-solving, mentoring, and management. Recent collaborative community-based projects led by MACJ students have helped local law enforcement agencies address challenges related to race relations and recreational marijuana.