Behind the scenes, Golf Channel Director Peter Esposito ’88 brings the sport’s emotions to the viewer. 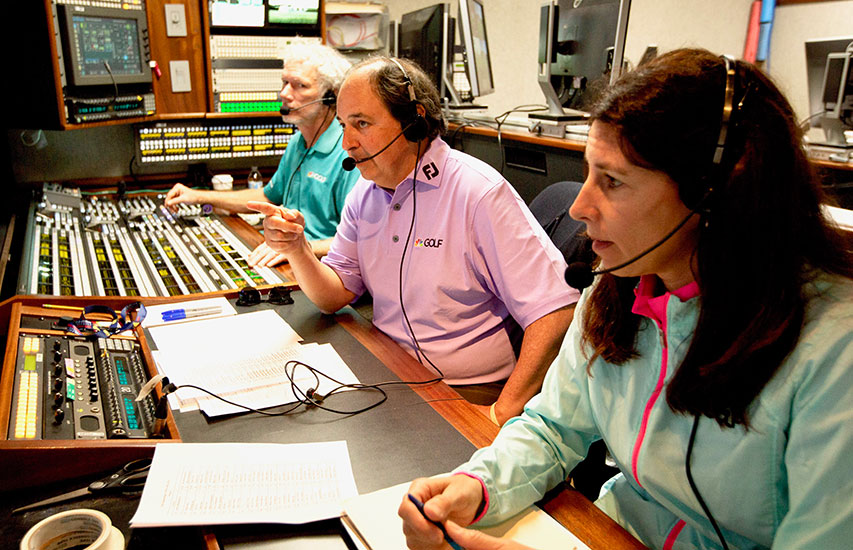 Behind the camera, it’s a different story. Because preparation for the optimal viewing experience for those at home is a time-consuming process, planned meticulously by directors and producers so the transmission appears seamless.

One of those responsible for bringing golf to millions of living rooms for the past two decades is Peter Esposito ’88, Director of Live Tournaments for the Golf Channel since 1997, two years after the cable news broadcaster debuted its golf-only programming. In the production truck, Esposito is surrounded by a dozen producers and programmers. There are often up to 60 more personnel, spread out over whichever 18-hole golf course is hosting this week’s tournament. That includes camera operators, some of whom are standing on platforms, hoisted into the air by 140-foot cranes.“People are always telling us they had no idea how fast things move and how many people it takes inside a production truck,” says Esposito. “Everything is done to optimize the experience for the viewer. Our goal is to bring them the emotion of the event.”

As an athlete and Boston sports fan growing up in North Adams, Massachusetts, Esposito at one time had aspirations of being in front of the camera. He recalls practicing his play-by-play skills as a boy and playing sports with his brother, Paul, now a high school hockey coach in Newtown, Connecticut. Peter also played hockey before becoming a referee, and is proud of his 15 handicap in golf. His mother, Marian, still a golfer at 82, was the one who introduced Peter to the game at Taconic Golf Club in Williamstown, Massachusetts.

Esposito had an early inkling that a career in sports broadcasting would suit him, and found Curry College perfectly situated near Boston’s media activity. In the Communication Department, he found mentors in professors Alan Frank and Bob MacNeil, and his first gig with the college radio station, WMLN. Internships at WWOR-FM and WLVI-TV followed, including Esposito’s first experience interviewing professional athletes from the Boston Red Sox and Celtics.“

A month after I graduated from Curry,” says Esposito, “I got a full-time job at ESPN. I can’t stress enough how important those internships were for my career.”Over the next six years, Esposito learned the intricacies of the production side of sports broadcasting. He left ESPN at the end of 1994 to join the staff at the fledgling Golf Channel, relocating to Orlando, Florida. Golf has since dominated Esposito’s orbit, as he directs tournaments 30 weeks a year. A quick look at his upcoming calendar reveals events in Pebble Beach and Newport, California, two in Florida, and one in Punta Cana in the Dominican Republic.

Over the years, golf has sent Esposito to seven British Opens, two Solheim Cups in Sweden, and countless tournaments in Mexico, Canada, the Caribbean, and beyond. Each venue must be scouted months in advance, whether for the PGA, LPGA, or the developmental Korn Ferry circuit, where aspiring pros play for their PGA Tour cards.

On those site surveys, Esposito drives the golf course with production colleagues to select ideal locations for the announcer’s booth, the TV compound, and the more than a dozen cameras that will follow 1.62-ounce dimpled balls – 1.68 inches in diameter – on their journeys around vast acres of fairways, trees, and lakes. For tournament weeks, Esposito and crew typically arrive on site days in advance for set-up, including driving the course to visualize how the event will present to the television viewers and rehearsing camera angles. Broadcasting golf requires highly specialized knowledge for the cameramen and women, who must anticipate trajectories for each shot so their lenses can follow the action in real time. Every course presents a distinct set of challenges, whether figuring out the best way to showcase the breathtaking views at The Ocean Course at Kiawah Island in South Carolina or catching breaching whales in the background at Hualalai Golf Club in Hawaii.

“Where golf is different than a baseball or basketball game is you have 18 holes as opposed to one court or field,” Esposito explains. “In golf, every shot is different, every hole is different. What I love about the sport is that no segment or shot is ever duplicated.

"The way he sees it, the vital time for Esposito and crew is the handful of hours each tournament day they are on the air. “It’s my job to decide how each shot will look,” he says, “when the graphics get put in, which cameras to use.”

The mechanics of golf broadcasts must be carefully balanced with the emotional element of the game – the celebratory fist pump after a crucial putt; the tears of joy or sorrow for a missed one; the arm of a caddy embracing the golfer. Esposito considers himself a storyteller first and foremost, anticipating which moments justify multiple cameras, how long to stay on one shot, and understanding the stakes for each golfer.

“In the golf world,” he says, “we appreciate how very few players really succeed to the ultimate level, and it’s tough to portray to viewers at home that they are grinding for their lives. It can be tough to watch somebody fail. But there are also incredible moments. I get paid to bring that emotion to the viewer at home.”