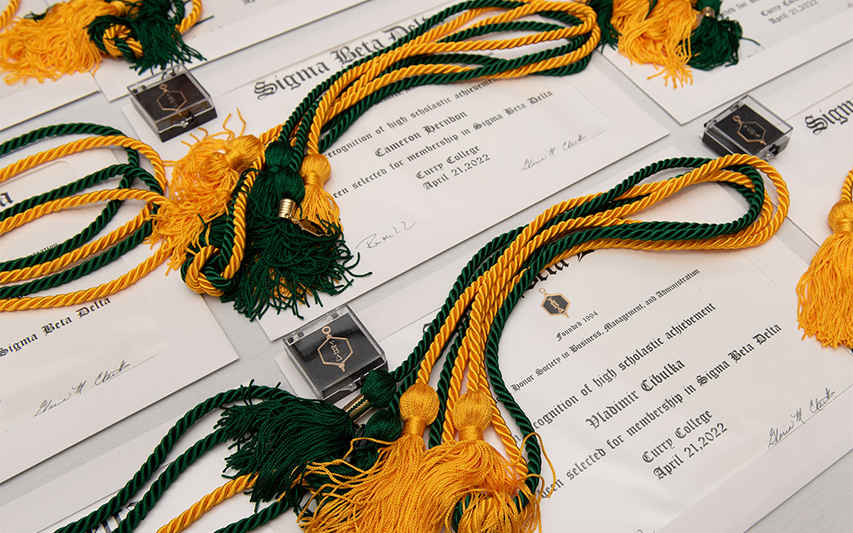 Sigma Beta Delta is the International Honor Society in Business.  The purpose of Sigma Beta Delta is to encourage and recognize scholarship and achievement among students of business, management and administration, as well as, to encourage and promote personal and professional improvement and a life distinguished by honorable service to humankind.

View Photos from the 2022 Ceremony

The beginnings of Sigma Beta Delta can be traced to June 19,1986, where, at a Beta Gamma Sigma Long-Range Planning Committee meeting in Williamsburg, Virginia, the decision was made to thoroughly examine its relationships with AACSB non-accredited schools. In subsequent discussions, Beta Gamma Sigma leaders acknowledged that the business honor society is a vital participant and positive force in higher education and should be available to all regionally accredited baccalaureate institutions.

The culmination of the discussions was a decision by the Beta Gamma Sigma Board of Governors in January 1994 to establish Sigma Beta Delta. Seven founding chapters were established early in 1994. They include: Belmont University, Houston Baptist University, McKendree College, Morehouse College, North Carolina State University, Saint Leo College and Southern University. By the end of the chartering period, June 30,1995, an additional 54 charter chapters had been installed for a total of 61 founding and charter chapters. Through September 1998, a total of 123 chapters had been established in 38 states.

The creation of Sigma Beta Delta Follows a 200-year tradition of honoring scholastic achievement in higher education, beginning with the establishment of Phi Beta Kappa in Williamsburg, Virginia 1776.

The Meaning of Sigma Beta Delta

The principles of Sigma Beta Delta are represented by three Greek words, the initials of which form the name of our Society.

Sigma is the initial letter of the Greek word which means wisdom.

Beta is the initial letter of the Greek word which signifies honor. Honor is a personal quality of the highest value.

Delta is the initial letter of the Greek word which signifies the pursuit of meaningful aspirations. To aspire to worthy goals sets apart persons of accomplishment from those who merely mark time with their lives.

To be considered for invitation to the Society, the highest national recognition your faculty can offer, students must rank in the upper 20 percent of their class. This is the opportunity to become one of the select few who earn lifetime recognition within Sigma Beta Delta, the International Honor Society for Business, Management and Administration.

More information can be gathered from: http://www.sigmabetadelta.org/