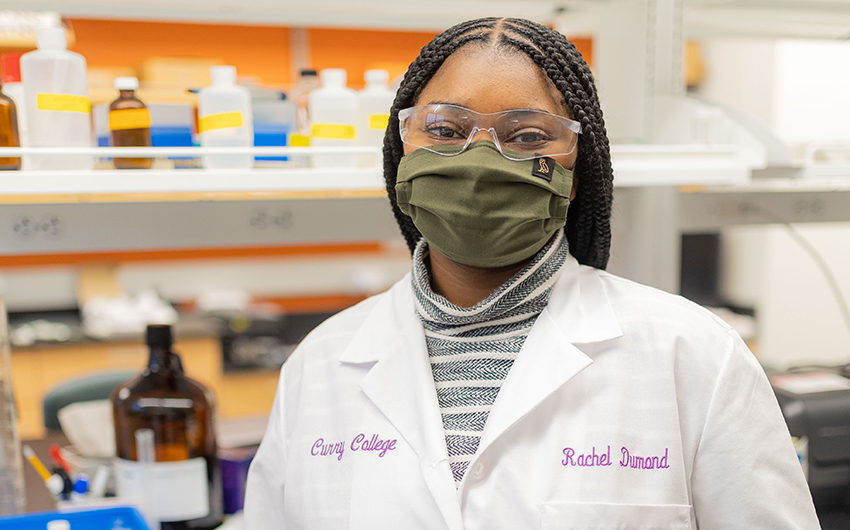 They might only be halfway through their last semester at the College, but many graduating seniors are already making plans for their next steps after graduating in May.

Rachel Dumond '21, a  biochemistry major, was recently accepted to the Alpert Medical School at Brown University, which admits roughly two percent of applications for approximately 140 students per class.

"To be able to say that I was admitted to my top choice is unreal," she says. "Curry's science faculty and the dedication they have for their students place Curry pre-meds on a pretty much equal playing field with students from bigger colleges. There was never a lack of support throughout my time when I needed help making decisions about things like summer internships or standardized testing logistics. I'm blessed to have an entire network of supporters that include my friends, family, and those close to me at Curry."

The senior is interested in exploring radiology, pathology, general surgery, or orthopedic surgery as potential specialties. While Dumond is still waiting to hear from other medical schools, she says that the Alpert Medical School (AMS) is her first choice. "AMS has a particular dedication to student involvement and support, which is something that is a priority for me after coming to Curry."

Dumond joins many Curry students who are now celebrating acceptance to their top choice programs for law, medical, and dental school among other prestigious graduate programs. Dylan Saraiva '21 aspires to become an optometrist and will study this fall at the New England College of Optometry and Frank Cundiff '21 was awarded a full scholarship to Rutgers School of Dental Medicine.

Having graduated from Curry in December, Mackenzie Rider '21 is now studying in the Masters of Public Health program at George Washington University, while Bella Shields '21 will begin law school at Suffolk University in the fall, and Alyson Hampston '21 will attend the School of Social Work at Boston College. Hampston also has plans to pursue a dual law degree. "I want to work more on the legal side of social work to protect at-risk children and families.”

Jake Force '21 considers both Boston University and Northeastern University to help launch his career in sports journalism. "As much as the  communication program and  PAL helped me accomplish success at Curry, a lot of the important things I learned during these four years came outside of the classroom. In a lot of ways, I think that's what college is about, what you learn outside of the classroom," says Force.

Many soon-to-be Curry alumni are stepping directly into the work world after graduating this spring. Jaime Knapp '21, an early education and care major, accepted a teaching role at Gilson JCC Early Learning Center, and Allie Wysocki, a criminal justice major, is now working as a corrections officer and also aspires to work in the Massachusetts court system. Accounting students Chris Michaels '21 and Cody Murch '20 MSA '21 both have early job offers with competitive firms. Murch was offered a job to join one of the "Big Four" accounting firms, KPMG, LLP. Brittany Soares '21 will join the corporate technology team at Citizens Bank as a software engineer. "It's exciting to have a full-time offer well before graduation, and I know it is a direct result of the hard work and dedication I've put in at Curry and throughout my internships," she says.

Monique Magras '21, a  psychology major, was recently selected as part of the 2020-2021 cohort of the Teach for America program and also wants to earn a master's degree in school psychology. Magras is among the select 12 percent of tens of thousands of applications that competed to work with the national education program, which places its recruits in the nation's highest-need elementary and secondary schools to expand educational equity and access and opportunity for all students.

"I love working with children, but I wasn't sure what my next step would be," says Magras. "Dr. Mia Khera introduced me to Teach for America, and after looking at the website and talking to a recruiter, I realized this is something that allows me to work with children and give back to the community. I have had teachers believe in me more than I did myself, so I want to do the same for someone else."

As Commencement approaches, the College is making plans to celebrate the entire Class of 2021. Dumond believes her acceptance to medical school at Brown University is as exciting to her as her army of supporters.

"I've seen a great outpouring of support from everyone who has believed in me from the beginning," she says. "I've had the benefit of being surrounded by the same group of driven, like-minded classmates since I was a freshman. What I’ve enjoyed the most during my time at Curry is meeting and learning with those people. I also think the greatest part about being here has been the relationships that I've fostered with my faculty. This achievement is special to me because I can share my success with all of them."