Want to get ahead? Need to catch up? Take a Winter Class online! 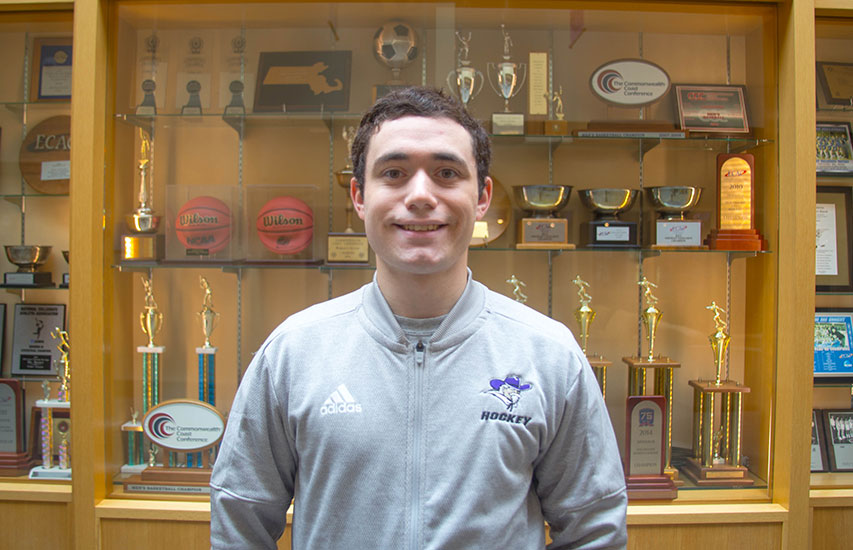 As far back as he can remember, Seth Corwin, class of 2020, has been devoted to the game of hockey. One of his earliest memories is a Christmas day skate with his father in an empty Dane County Coliseum in Wisconsin. As the radio broadcaster for the Madison Monster hockey club, his father had an all-access pass to the rink.

“Being around the team all the time, in the coliseum at all hours -- really behind the scenes -- had a huge impact on my life and for what I wanted to be when I grew up,” Seth says.

Of course, being an elite-level hockey player was all part of his plan. And now a fourth-year netminder for the Colonels, he can check that dream off the list. His next goal: to be an agent for hockey players from high school to the professional ranks.

Seth has wanted to be an agent almost as long as he dreamed of playing hockey. He used to spend hours watching documentaries of the great Boston Bruin, Bobby Orr, on the family VCR. “I was in awe of his playing, of course. I wanted to be just like him. But something that struck me, and has remained with me all these years, was his relationship with his agent, Alan Eagleson.”

Eagleson was convicted of fraud and embezzlement and briefly imprisoned in the 1990s, after it was revealed that he defrauded his clients, including Orr. “That story had a profound effect on me. I wanted to be an agent ever since,” Seth says. “ I wanted to be the agent that actually took care of his clients.”

To that end, Seth has been laser-focused on completing a degree that will prepare him first for law school, then a long career as a sports agent. Seth was recently accepted into his top choice of law schools, the University of New Hampshire Franklin Pierce School of Law, where he will enter the Sports Law program, propelling him one step closer to achieving his dream.

Seth will graduate this spring with a degree in Business Administration and a concentration in Sport and Recreation Management, which is now offered at Curry for the first time as a full major.

“I’ve learned so much in class about sport management, including collective bargaining, marketing, and various legal issues involved in the industry,” Seth says. What’s more, his internship with the Boston Management Group, an agency that represents elite hockey players, has provided critical real-world experience.

In many ways, Seth says, being an agent is really a “people” profession. “All day long you’re on the phone or meeting with people in person; negotiating, coaching, helping people achieve their goals.” That’s why his internship experience is such an invaluable part of his education. Among other things, he sits in on meetings with players, coaches, directors of player development, and other key stakeholders. “There is nothing like being in the room to gain the kind of experience you’ll need to make it in the business.”

But it’s not always as glamorous as it sounds, Seth adds. “It’s not always big endorsement deals with Nike or Adidas. You’re not always in meetings with the head coach of the Boston Bruins. You’re mostly working with players and their families to help them get what they want out of hockey and achieve their goals in life.” It sounds like a perfect match for Seth. And as he straps on the pads for his final year of collegiate hockey, he can rest easy knowing he’s prepared to tackle his next chapter.