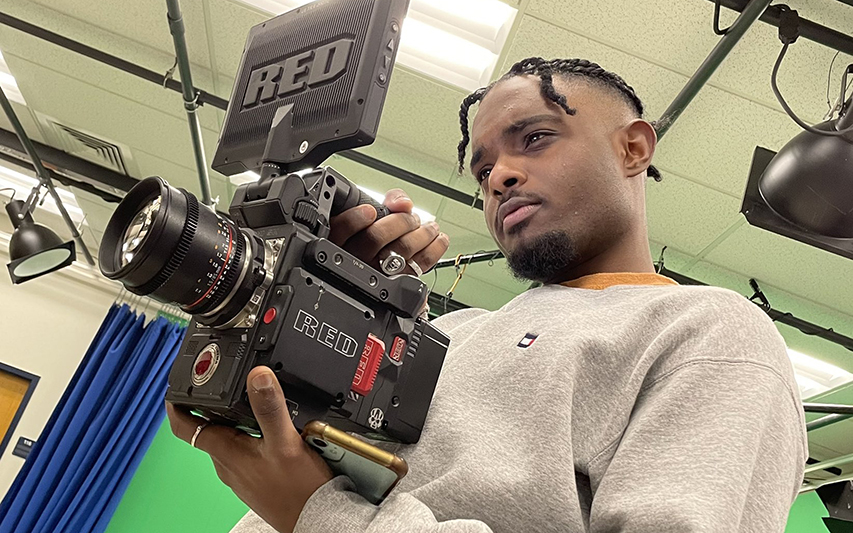 Curry's film concentration will prepare you for careers in this vast and expanding field. Film is growing as an industry in the Boston area and beyond. You will study of film and the film industry through a wide range of courses in film history, film aesthetics and appreciation, film production, independent studies, and internships.

Students interested in film will also learn hands-on film and video production from professional filmmakers. Students can study RED Camera Film Production, DSLR and 4K HD video, Film Directing, Documentary and Digital Movie making, The Business of Hollywood, Screenwriting for Film and Television, Acting for the Camera, and more. Independent Studios allow students to work on their own projects and courses, and internships in Los Angeles are also popular options for many Curry film students.

You may also create your own concentration through our Individually Initiated Concentration option. Examples of IICs include photojournalism, event planning, and political media management.

Semester in LA, NYC, and DC

Curry students can apply for a once in a lifetime experience – a semester away. Our students have lent their talents to Hollywood movie sets, to NBC, and even The White House. They’ve set the stage for the crime scenes on CBS’s Criminal Minds, and have learned how Jimmy Kimmel keeps us all laughing. These are just a few of the incredible opportunities available when you choose Curry.

The Path to Your Dream Career

Just a few of the many Communication industry careers include:

Our Alumni in the Field

Our students and alumni are leading the way at:

The Internship Program at Curry College offers students the opportunity to explore a variety of career paths by learning about their interests, skills, strengths, and values while acquiring course credits.

WMLN is completely student-run, under the supervision of Director of Radio, Professor Ken Carberry '80. Students can get involved in a variety of positions from day one on campus - and even host their own shows!

CC8 is Curry College's television station, housed in our state-of-the-art Hirsh Communication Center on campus. Students can work in a variety of positions at CC8 through our TV Practicum course.

The purpose of the Curry College Public Relations Student Association is to increase the knowledge of the public relations profession and to provide students with opportunities and skills for the future.

Not only do Curry students have endless internship opportunities in the Boston market, but we also offer study away programs in D.C., L.A., and N.Y.C.

Lambda Pi Eta is a highly selective international honors society for students who have declared an interest in the field of communication and who have achieved a high level of academic excellence.

Along with institutional partnerships, you can create your own Study Abroad opportunity, or go global with our own faculty members as part of our Short-term, Faculty-led Courses.

Making the transition to college can be a little confusing and lot of fun. Your First-Year Experience at Curry College helps smooth out the bumps and puts you on the path to success.

At the heart of Curry College's undergraduate curriculum is our General Education (Gen Ed) Program. Gen Ed is based on our belief in the power and potential of the liberal arts.

Take the next step

We're excited you're considering our outstanding Curry College academic programs and look forward to helping you reach your career goals.