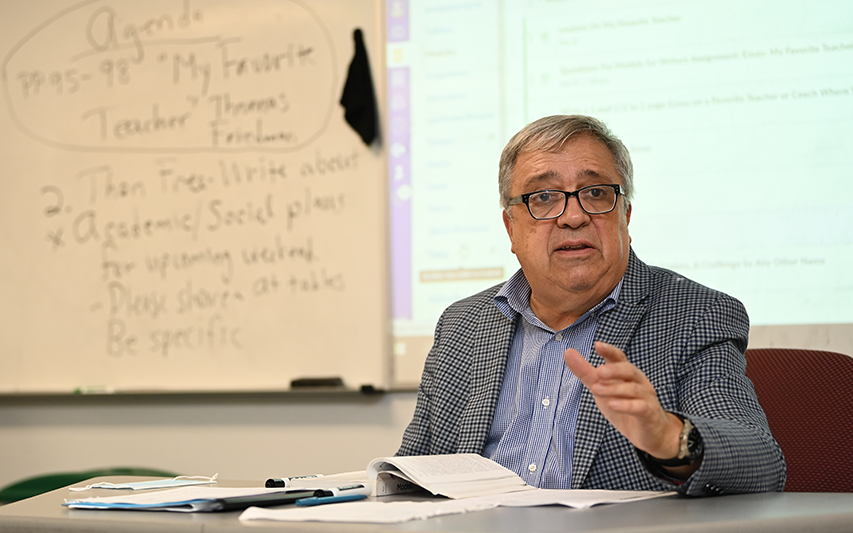 “It was very important for my career,” says DiIuglio, a senior lecturer in Curry’s Writing Program, who earned his master’s in Education while also teaching literature and composition at Curry. “Classes in educational theory and history were a strength of Curry’s master’s program, which was led by Dr. Gertrude Webb, who was known in Massachusetts for her expertise on learning disabilities. Learning about different teaching styles and the different ways students learn was also a big part of the program. That, to me, was very insightful.”

During his three-decade tenure at Curry, DiIuglio grew to love the community and the students so much that he recently became a member of the College’s 1879 Planned Giving Society, which recognizes alumni, family, and friends who want to mark the college’s long-standing history and bright future through estate gifts. DiIuglio says he is donating to the College because he feels both a desire and a responsibility to give back.

DiIuglio began his own educational journey at Rye Country Day School in Rye, New York and went on to Dickinson College (1976), where he studied European History and Spanish. While earning a master’s in TESOL (Teaching English to Speakers of Other Languages) at Boston University in 1978, he says Dr. Steven Molinsky, a well-known professor in the field, suggested he might enjoy teaching English as a second language and “that’s how I fell into it.” Since 1988, DiIuglio has devoted summers to teaching English to beginners part-time at BU’s Center for English Language & Orientation Programs. After earning his M.Ed. from Curry, DiIuglio earned a third master’s in Spanish and Italian from Boston College in 1990.

In his years at Curry, DiIuglio has taught English, World Literature, Spanish Culture, and post-war Italian Cinema (“La Strada” and “Cinema Paradiso” are among his favorite films). The opportunity to teach across the humanities has kept his career fresh, says DiIuglio, and has introduced him to countless young people within Curry’s diverse student body. These polite and motivated students, he says, are a large part of why he is grateful to the College and what prompted him to join the 1879 Planned Giving Society.

“We are deeply grateful that Professor DiIuglio has chosen to include Curry College in his estate plans,” says Edith Millard, a major gifts officer on Curry’s Institutional Advancement team. “As both an alumnus and a faculty member, Professor DiIuglio’s planned gift expresses how important his Curry experience was and is. I hope his thoughtful and generous gift inspires others to consider including Curry in their own estate plans.”

Beyond the students, DiIuglio says he long ago found a home within the greater Curry community – in the personal connections made on a small campus; in seeing President Kenneth K. Quigley, Jr. greet others on the campus paths; and in the school spirit forged by the athletic program. Watching the College expand its reach over the years has been a pleasure for the professor to witness.

“Giving back to places that helped make your career is very important,” says DiIuglio. “I hope the gift will be used to help the College make a bigger imprint in the Boston area. Curry is a jewel that everyone should know about. I know the gift will be invested well.”