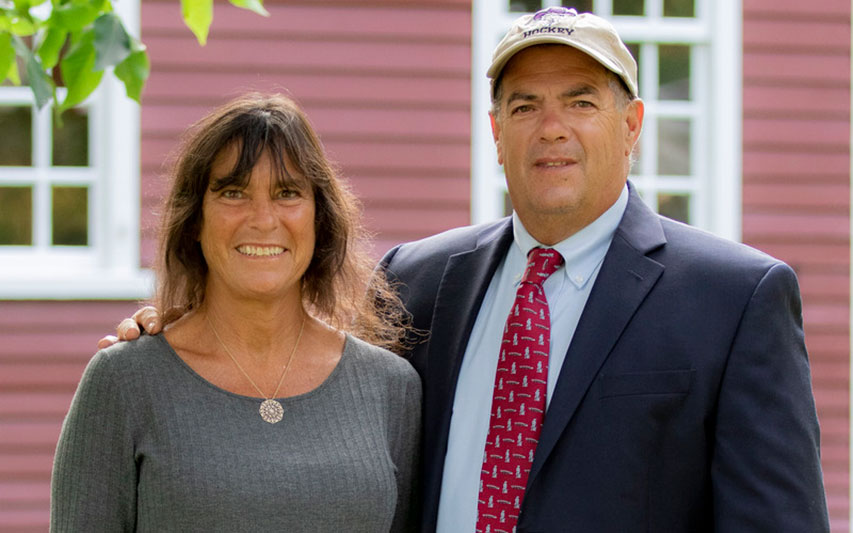 “Without Curry, our family wouldn’t exist,” said Matt McDonnell ’80 and Kathy May ’81 when asked about the significance of the College in their lives today. The young couple met while studying at Curry - he, a major in sociology, she in education - and today are the proud parents of five and grandparents to two.

Curry College not only brought the two together, but taught them both valuable life lessons that they continue to instill with their children today. “Family provides you with your roots, a sense of faith, beliefs, and morals, but it is only at a place like Curry where you learn how to grow and spread your wings,” says Kathy. “These ideals are something that we’ve carried through since our time at Curry. The college experience is like no other. For us, it was an incredible opportunity and a special place.”

Matt echoes the sentiment. “My time at Curry was eye-opening. When you arrive, you’re a kid. From new ideas and people to the responsibility of living on your own, Curry is a place where I matured, and it prepared me for what was down the road. When I left, I knew I could handle whatever was in front of me.”

The path ahead for Matt included more than 20 years in construction, which allowed him also to pursue coaching ice hockey in the winter. In 1988, he began coaching hockey at Governor's Academy, an independent high school in Byfield, Mass. He spent four years coaching with the Women's program and then 31 years coaching with the Men's program. Later on, he accepted a role as Head of Grounds for the school, where he manages and oversees all of the athletic fields. “I often tell my players to see me anytime. It’s easy to do, I have the largest office on campus,” he says, of the 456 acres surrounding the school. A few miles away in Rowley, Mass., Kathy works as a Third Grade Teacher at Pine Grove School, a dream career she’s had since she was young. “I knew when I was five that I would be a teacher. I like making sure the kids like learning,”

This year will mark nearly 35 years of coaching for Matt, much of which has been informed by his own unique experience as a student-athlete at Curry, where he played defense on the Men’s Ice Hockey team. “On the hockey team, everyone looked out for each other. If someone was struggling academically and might lose their eligibility to play, we all worked together to help out. It was something I never experienced before, and it is something I’ll never forget.” Kathy, too, was a student-athlete and competed with the Women’s Soccer and Basketball teams. She also enjoyed her time as a cheerleader at the College, particularly the comradery and friendships.

It’s those lasting connections and friendships that the couple genuinely cherish today. They often get together with fellow alums for group dinners or connect at Curry’s Homecoming and Family Weekend event in the fall. In addition to being Curry Council members, the McDonnells recently joined the 1879 Planned Giving Society to help support the success of current and future Curry College students.

“It’s exciting to visit the new Learning Commons and see the state-of-the-art Science and Research Center. We know that these new initiatives won’t happen unless more people give to the College. It was a no brainer for us,” said Matt. “Curry has made a true difference in our lives, and by being part of the 1879 Planned Giving Society, we can lead by example and help continue that impact for more students.”

Learn more about becoming a member of the 1879 Planned Giving Society and how you can support Curry the way Curry supported you, or call the Institutional Advancement and Alumni Engagement office at 617-333-2121. Estate gifts can include bequests, life insurance designations, and IRA distribution.